Monsoon cleans the air over South Asia, spreading pollution around the world 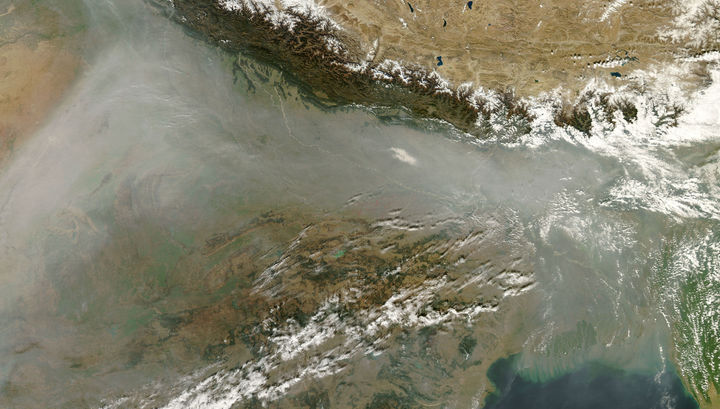 Every year during the dry winter season, South Asia covers a veil of dust and smog, known as the Asian brown cloud, and with the onset of spring, the ominous haze disappears like a wave of a magic wand. Now an international team led by scientists from the Max Planck Institute of Chemistry has found out that the tropical monsoons clean the air over the region, but they also carry pollutants around the world.

Monsoon moves colossal air masses and play a decisive role in shaping the climate of South Asia. In the summer, these winds direct the moist ocean air towards the Himalayas and carry with them storm clouds that have been raining the region for months. In the winter, the monsoon unfolds in the opposite direction, “feeding” the dry season.

The main source of air pollution over the territory of India, Pakistan and China is the burning of natural fuels. For example, emissions of nitric oxide and sulfur dioxide over the past decade have increased by 50%. Scientists have long suspected that powerful air currents can lift dust and harmful gases above the clouds, from where they calmly spread in all possible directions.

To better track these movements, Jos Lelieveld and his colleagues lifted the HALO airplane. This unique laboratory for studying the climate can soar to a height of fifteen kilometers and overcome more than eight thousand kilometers, which allows us to explore the remotest corners of the planet.

In July and August 2015, researchers flew through the monsoon streams, analyzing the composition of the atmosphere with the help of a special climate climate air pollution monsoon anticyclone weather Asia meteorology HALO atmosphere India China set of sensors. However, the team within the framework of the project did not confine itself to the southern regions of Asia, and also carried out research on the Middle East, North Africa and the eastern Mediterranean.

As a result, a model was constructed that demonstrates the movement in the atmosphere of substances such as sulfur dioxide, nitric oxide, ozone, aerosols, chlorine-containing molecules, hydrocarbons and their decomposition products. In an article published by the authors in the publication Science, it is reported that the main vectors of pollutants are monsoon-related anticyclones, which raise particles to a height of 15 kilometers, and then carry away to many thousands of kilometers. The main source of pollution is not China, but India.

In addition, scientists have found inside the anticyclones an elevated level of hydroxyl radicals, which oxidize harmful particles and accelerate their “leaching” from the atmosphere. True, this effect also has the reverse side: oxidized particles can combine and form new aerosols, also scattered throughout the planet.

“The atmospheric cleansing agent – hydroxyl radicals – is formed when ozone and water are destroyed under the influence of sunlight,” explains Andreas Hofzumahaus, a researcher at the Jülich Research Center. “Usually, when a radical reacts with a pollutant, it loses its properties, but in the presence of nitric oxide can be restored and continue to clean the atmosphere of harmful emissions. ”

Nitric oxide also appears in the air during lightning strikes. And since spring monsoons are often accompanied by thunderstorms, the stocks of this substance are renewed at a high altitude, and the hydroxyl radicals are constantly regenerated to remove harmful impurities again.