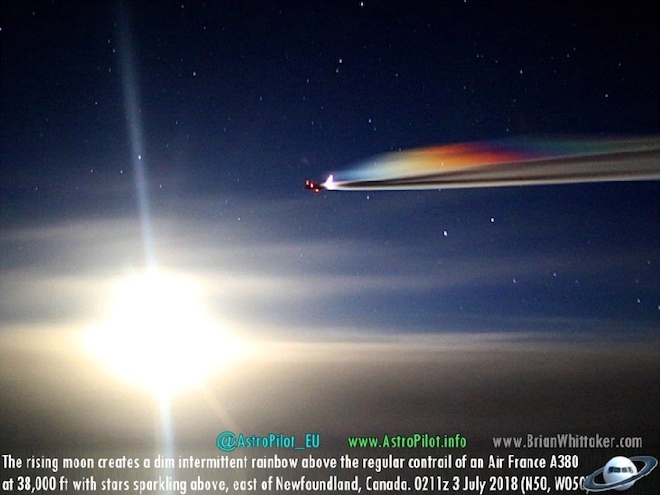 The pilot Brian Whittaker is able to catch atmospheric wonders during the flights between the US and Europe. Last Tuesday, July 3, he added to his collection a new amazing picture taken from the cockpit.
“It was a beautiful evening, the silvery clouds were shimmering all around, which I observed from a height of 11,600 m, but the most striking thing I saw was the rainbow coming from the wing of the plane,” says Whittaker.

“We flew to the east of the Canadian Newfoundland, when the rising moon lit up the inversion trail, creating an iridescent ribbon. The stars shone at the top, the picture was fabulous. ”

Although we clearly see the rainbow, this definition is technically incorrect. A rainbow is a natural optical phenomenon observed when illuminated by water droplets of rain or fog. In this case, the inversion trail was filled with ice. Air vortices that break from the ends of the wings form a low-pressure zone, where water from moist air can condense. The temperature below the freezing point contributes to the formation of ice crystals that divide the light of the rising moon into iridescent colors.