“Moulages” of stem cells cured mice of an infarct 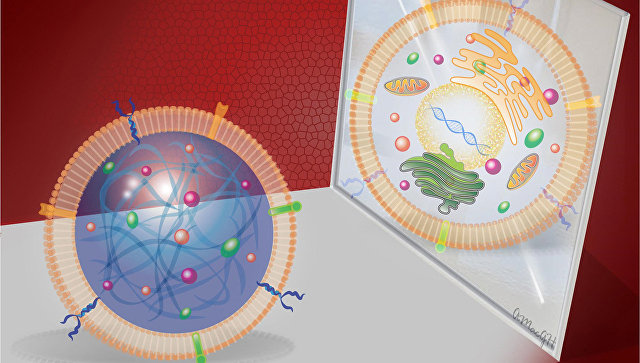 Scientists from China and the USA found out that some organs it is possible “to deceive” and force them to rejuvenate itself, using special moulages of stem cells which forced heart of several mice who endured an infarct to get rid of its consequences.

“We took “load” and a cover of stem cells and packed them in the nanoparticles which are gradually decaying in an organism. Such synthetic “cells” work approximately as well as vaccines. Their membranes allow them to bypass immune system, to be bound to a heart tissue, to throw out hormones of body height and to force cells grow, but at the same time they can’t breed in itself. Thus, we receive all pluses of stem cells and their any minuses” — Ke Cheng from Zhengzhou university (China) tells.

The reprogrammed or embryonic stem cells are considered as one of fixed assets today for treatment of many serious or incurable diseases, such as Diabetum of the first type or a degeneration of a retina at which a part of the major cells of an organism dies because of defects in DNA or some other reasons. Restoration of their population by means of “preparations” from stem cells can liquidate a problem or at least prolong life to the person.

On the other hand, the first experiences on such cells showed that there is larger and still unsoluble problem – a part of stem cells, because of the mutations which are present at them, can turn into “ancestors” of cancer tumors. The last 10 years scientists try to solve this problem, developing new techniques of cultivation of stem cells, however safety of treatment by them so far nobody can guarantee.

Chen and his colleagues could bypass this problem, “having removed” from a stem cell all unnecessary – its core, DNA, systems of production of proteins and other organoids, having left only its albuminous contents and a cover. Both, as show experiments, play a key role in work of all positive properties of stem cells, and authors of article decided to check what will occur if to frame the nanoparticles comprising parts of covers of stem cells and their squirrel.

Being guided by this idea, scientists made a set of nanoglobules of the biopolmers decaying in cells filled them with proteins which make cells – “preparations” of future cordial tissue in germs, and entered similar “vaccine” into a blood of the mice who recently endured an infarct.

As showed this experiment, nanoparticles were successfully attached to heart cells, emitted hormones of body height and other proteins to the environment and forced a cordial tissue to repair themselves. The result of their action, according to Chen, was indistinguishable from how “usual” stem cells work.

According to scientists, such nanoparticles have several other advantages, besides safety, in comparison with stem cells. Unlike live cultures of cells, similar “moulages” it isn’t necessary to feed, they can be frozen and to store very longly that is impossible in a case with usual stem cells. As scientists hope, in the nearest future there will be other “vaccines” on the basis of contents of stem cells which can be used for treatment of other illnesses.