Mushrooms are the most ancient creatures on Earth

Paleontologists discovered the most ancient fossil of a multicellular creature on Earth that lived in the primary ocean of the planet 2.4 billion years ago and was supposedly a fungus.

“It is possible that we all searched for the ancestors of the fungi in the wrong place.We believed that they originated on land, in an aquatic but not a marine environment, and required for their inception a developed soil and soil bacteria.It turned out that the ocean floor in the Proterozoic era could Be an ideal haven for the birth of multicellular life, “commented Nicola McLoughlin of Rhodes University in Grahamstown, South Africa.

The first living organisms appeared on the Earth in the Archean era, and so far there is no generally accepted point of view about how and when life began. To date, there are several fossil evidence that microbes already existed in the primary ocean of the Earth about 3.4 billion years ago, but many scientists believe that life could have originated much earlier – four or even 4.2 billion years ago.

Multicellular creatures, including plants, appeared much later – about 600-800 million years ago, shortly before the epoch of the so-called “Cambrian explosion” – a short span of time 550 million years ago, when all the modern types of animals and the ancestors of plants and mushrooms . Many scientists suggest that multicellular plants could appear much earlier, but traces of this have not yet been found.

Stefan Bengtson of the National Museum of Natural History in Stockholm, Sweden, and his colleagues say that the first multicellular organisms arose almost two billion years earlier, having found in South Africa supposedly the oldest remains of a primitive fungus.

Recently Bengtson and his team found in India the oldest remains of algae, imprinted in rocks in the age of 1.6 billion years, which led them to look for other possible traces of life in the oldest sedimentary rocks of the Earth.

In these searches, scientists relied on the popular idea today that life on Earth could arise not just in the ocean, but in the vicinity of underwater volcanoes and geothermal springs. They threw out a large number of nutrients and chemical “food” for the first living organisms, which in other regions of the primary ocean was noticeably less.

Studying the rocks formed in the vicinity of such underwater volcanoes that existed in place of modern South Africa 2.4 billion years ago, scientists came across a supposedly ancient sample of multicellular life on Earth, which was not a plant or an animal, but a fungus.

Studying the volcanic rocks found in the vicinity of the town of Grykvastad in the west of South Africa, scientists discovered deposits of a variety of strange branching structures, which scientists initially thought were microbial prints. Having enlightened them with the help of a particle accelerator in their laboratory, Bengtson and his colleagues realized that they are dealing with a multicellular and quite complex creature.

This creature, as long as the anonymous mushroom, grew on the ocean floor in place of modern South Africa on the surface of lava emissions, frozen, scientists suppose, about 10 million years before the formation of the fossil. Over time, the remains of these mushrooms were buried under the growths of chalky minerals, and in this form they survived to our times.

According to the researchers, they have no doubts about the organic origin of these fossils, since both their structure and the complexity of their arrangement could not have been generated by inanimate nature. According to Bengtson, in the photographs of these fungi, not only the mycelial filaments can be seen, but also spores and hyphae-seals in the mycelium that absorb nutrients and water from the environment.

It is quite possible, Bengtson admits, that this creature was not the cousin of modern fungi, but simply possessed a similar species and biology. In any case, their discovery, according to the scientist, pushes the time of the existence of multicellular life several hundred million years ago in the past. 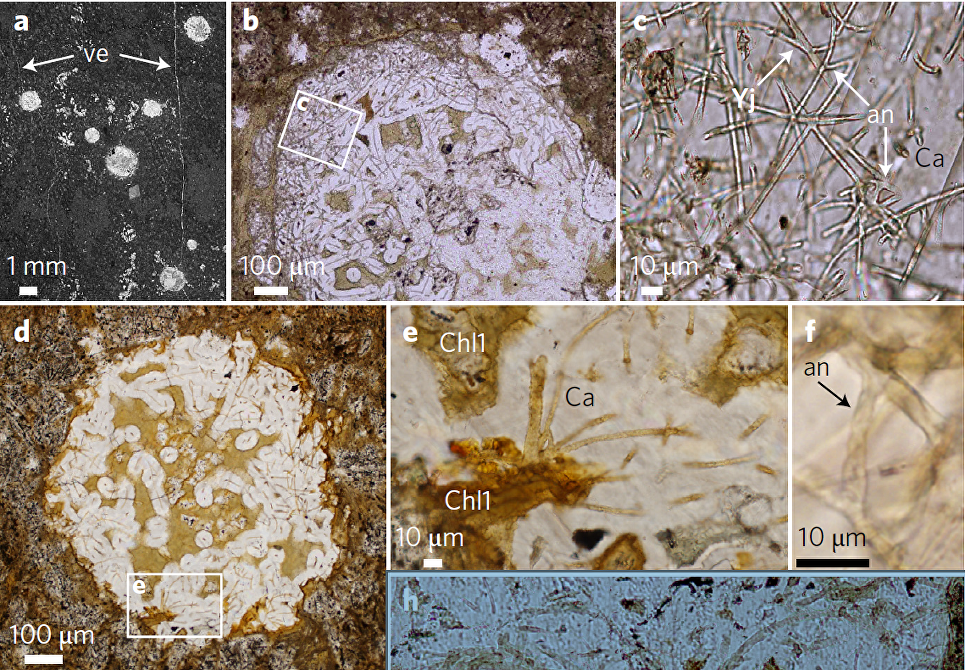