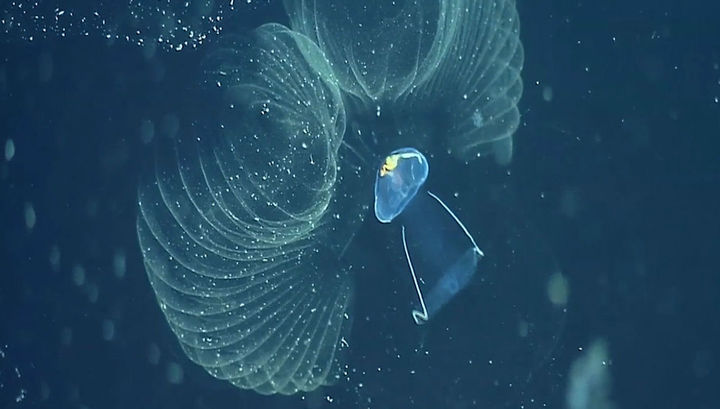 Researchers may have found the reason why plastic in the ocean is much smaller than the calculations suggest. Small filtering animals that inhabit the World Ocean absorb tiny pieces of plastic and spew them into granules. The latter then descend to the bottom of the ocean.

Observations of such creatures, known as appendices, show that they are capable of “spreading” a huge amount of microplastic from the upper layers of the ocean to a depth. Perhaps they will help answer the long question of scientists: why in the ocean is floating much less plastic than expected?

Purification of surface water from plastic may seem like a good idea, but in reality everything can be different. This means that plastic is a much greater threat, says Kakani Katija of the Monterey Bay Aquarium Research Institute. “It can be detrimental to the creatures that live in the depths of the ocean,” she said.

By the way, there is indeed a reason for such concern: the pollutants banned decades ago were found even in the Mariana Trench.

Moreover, microplastic can quite affect people, says scientist Anela Choy (Anela Choy). We eat many sea creatures that live on the seabed. And the pollution of the ocean by microplastic, by the way, has already jeopardized the worldwide harvest of oysters.

Although such a concept as the “Great Pacific Garbage Spot” conjures up images of a floating garbage island, the bulk of the plastic in the World Ocean consists of tiny pieces that remain invisible to the human eye.

To find out what is really going on with the plastic, the researchers began to study the appendices, focusing on the giant individuals Bathochordaeus stygius. The length of the creatures resembling tadpoles does not exceed a few centimeters, but the mucus of the house that they excrete can reach one meter in diameter.

Previous studies of Catia have already shown that such animals annually filter a huge amount of sea water. “They are incredibly important organisms in the middle layers of water,” she notes.

This time, experts used remotely controlled vehicles to spray tiny plastic balls near individual giant appendicles. The scientists wanted to find out what would happen. All observations occurred at a depth of 200-400 meters.

Some plastic balls stick to the slimy appendicular lodges, which they regularly discard. Other balls were swallowed, and then “integrated” in the fecal lumps. And the house, and the result of lunch plunges later on the seabed, where all this is then eaten by other animals.

Matthew Cole of Exeter University says that these most fecal granules containing floating plastic are sinking to the bottom more slowly, hence the likelihood that they will be eaten down the road grows.

“In other words, there is a chance that the plastic will again be eaten by other animals,” he says. Only one thing remains unclear: how does the microplastic affect the organism of the animals that feed them.