An interesting report was published in December 1998 by the biologist of Fordham University David Barney and the Madagascar archaeologist Ramilisonin in the journal American Anthropologist. The authors analyzed the evidence collected by them during July-August 1995 in the remote fishing village of Belo-sur-mer in the south-west of Madagascar.

Local residents described two, scientifically unidentified, creatures. They are now known as kilopilopitsofy, which translates from Malagasy as “hanging ears”.

Eyewitnesses were interviewed independently of each other, and scientists tried to avoid possible leading questions whenever possible, which could push people to certain answers. All measures were taken to obtain the most accurate and reliable information. The testimony of the seven main witnesses was tabulated.

The most authoritative and informed was a local old man named John Nelson Pasko, literate and visually impaired. He argued that he had seen the kilopilopitsof more than once; The last time, and very close – in 1976.

According to his description, this is a nocturnal creature the size of a cow, but without horns, with a very dark skin, with pink spots around the eyes and mouth and rather large hanging ears. Assuming that this is just a fabulous comprehension of the stories about African elephants, which the sailors told to the old sailor who sailed from the mainland, Pasko showed the figure of an elephant, and he readily recognized the kilopilopitsofi in it.

True, he claimed that the local animal was smaller, without a trunk, but with a wide mouth full of large teeth, and when it was frightened, it fled loudly into the reed thickets. In the end, the silhouette of the hippopotamus was chosen as the closest to the portrait of the kilopilopitsofi. 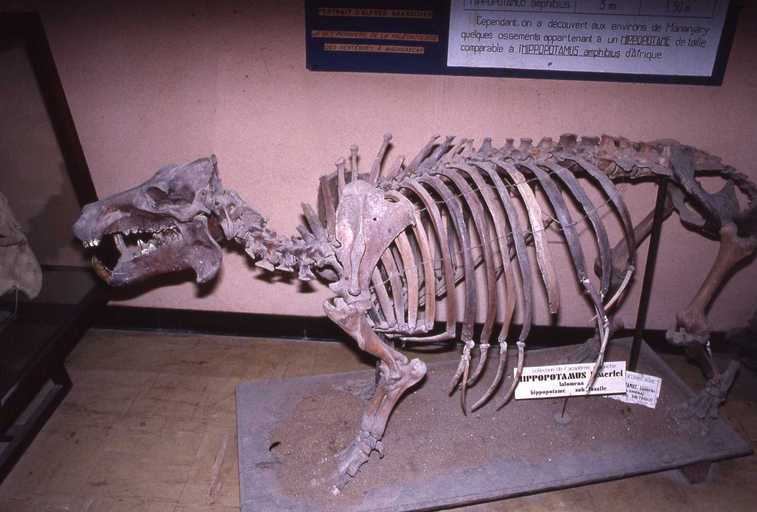 The Madagascar pygmy hippopotamus is a common name for several species of extinct behemoths once inhabiting the territory of Madagascar, apparently very similar to modern dwarf hippos that meet $ CUT $ in Africa. He still lived in Madagascar a thousand years ago, but his newer remains are unknown. In the photo there is a skeleton in the museum.

Pasko, who was an expert on the voices of wild animals, skillfully imitated them. The scientists asked him to reproduce the voice of the kilopilopitsof, and the old man issued a series of deep, extended sounds very reminiscent of grunting the usual mainland hippo.

And yet, if this mysterious animal is a surviving representative of an extinct Madagascar species, how can one explain it completely not by “hippopotamus” ears?

Zoologists say that in fact it can be drooping cheeks and jaws, in the night darkness taken over the ears. On the other hand, some zoologists believe that there may have been several varieties of the dwarf Madagascar hippopotamus, and one species could have large ears that helped it dissipate excess heat.