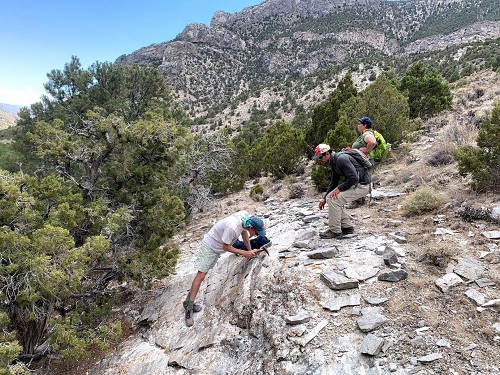 A team of professors and students at the University of Wyoming has identified an unusual belt of igneous rocks that stretches more than 2,000 miles from British Columbia, Canada, through Idaho, Montana, Nevada, southeastern California and Arizona to Sonora, Mexico.

“What makes this discovery so interesting and mysterious is that this belt of igneous rocks is much further inland, away from the edge of the continent, and contains no evidence of volcanic formation. In fact, all of the melting that produced the igneous rocks originally took place deep underground, five to 10 miles below the surface.”

Chapman is the lead author of a paper titled “The North American Cordillera Anatectic Belt,” which was published in Earth-Science Reviews.

One of the keys to unraveling the origin of the belt of igneous rocks is that these rocks formed mostly between 80 and 50 million years ago, during a mountainous growth called the Laramide orogeny.

“The Laramide orogenite created most of the large mountain ranges we have in Wyoming, and the name comes from the Laramie Range,” Chapman says. “Although there are no igneous rocks of this type and age in these mountains, we suspect that the tectonic processes that created these mountains also contributed to the melting of the Earth’s crust.”

Researchers have several working hypotheses about what caused the rocks to melt. One hypothesis is that water penetrated deep into the Earth’s crust.

“The geochemistry of these rocks shows that the melting may have occurred at relatively low temperatures, below 800 degrees Celsius,” says Jesse Shields, a UW graduate student in Minneapolis, Minnesota, who is working to solve the mystery. “It’s still very hot, but not hot enough to form very large amounts of magma. Water lowers the melting point of rocks, similar to the way salt lowers the melting point of ice, and can increase the amount of magma that forms.”

This work has implications for what causes rocks to melt and where specific types of magma can be found.

“Many of the magmatic systems in the study area contain economically important ore deposits,” says Runyon, who specializes in ore deposits. “Understanding the large-scale magmatic processes that form these provinces will help us better understand how ore deposits form and better explore natural resources.”