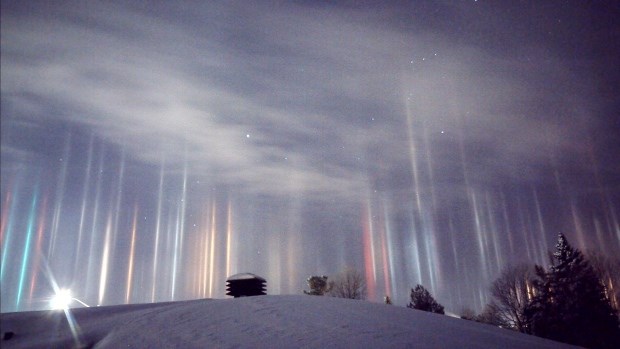 Recently Canadians have witnessed a surprising sight: a huge pillar of light flickered in the night as strange as if an extraterrestrial anomaly. However, the specialists from NASA believe that this is the fault of microscopic ice crystals in the atmosphere.

If the baby wakes you up in the second half of the night, it is unlikely to cause someone to positive emotions. However, Timothy Joseph Elzinga from Ontario was truly happy, when 2-year-old son woke him in the dead of night and complained that the strange lights in the sky do not give him sleep. Most of all, the panorama was like scenes from some science fiction movie, but this is not the work of aliens and not mysterious rays from space.

According to NASA, these light pillars have nothing to do with the Northern lights, how could think some. Scientists believe that this is a local, independent phenomenon, which can be observed only with a certain distance. For the most part this is an unusual glow comes from the suspension of tiny ice crystals in the air reflecting sunlight from the upper layers of the atmosphere. Usually, these crystals evaporate before reaching the Ground, however, when the temperature drops below zero, they can be formed in the near-earth space in the form of light snow, which some call the “crystal mist”.

Light poles can be seen not only in Canada. If you examine Instagram, you can see that the inhabitants of cold regions, such as Sweden, Alaska, Michigan and new Hampshire, are experiencing such a natural phenomenon.