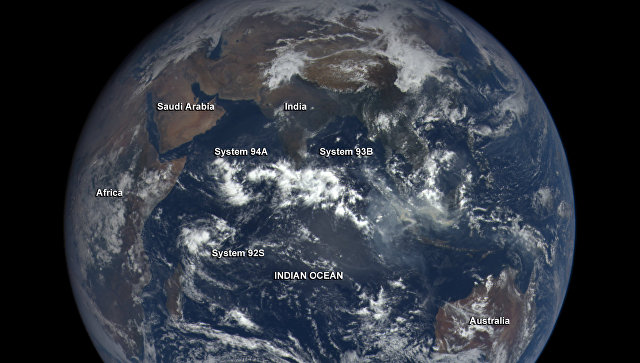 Mysterious white flashes, which can be seen on the DSCOVR probe images, were generated by particles of ice in the Earth’s atmosphere reflecting the light of the Sun directly into the objective of the cameras of this spacecraft, scientists write in an article published in the journal Geophysical Research Letters.

“Initially, we thought that the outbreaks were related to the reflection of the Sun from the ocean, but then we found a lot of such white spots and over land, they could not be a reflection of light from the water surface of lakes and rivers – the spots were too large. Do not arise on the surface of the Earth, but in its atmosphere, when light reflects off the ice floes turned horizontally, “explains Alexander Marshak from NASA’s Goddard Space Flight Center in Greenbelt, USA.

The DSCOVR probe, launched in February 2015, is one of NASA’s latest and most advanced climate satellites and the US Ocean and Atmospheric Administration (NOAA). Unlike other probes of this type, it does not rotate in the Earth’s orbit, but is in deep space, at a point where the gravitational forces of the Earth and the Sun balance each other.

This allows him to monitor what is happening on the planet as a whole, as well as to observe the cosmic “weather” and activity of the Sun. Every two hours he receives photos of the planet and passes them along with climatic and other scientific data to Earth, where they are processed by NASA specialists and climatologists NOAA.

The first photos taken by the EPIC onboard the DSCOVR revealed an unusual phenomenon – many of them had mysterious white spots and flashes, unlike clouds and other potential sources of white. Over the past two years, hundreds of thousands of such flashes have been found on the EPIC images, which excludes the possibility that they are caused by certain camera defects or cosmic rays.

Marshak, one of the leaders of the mission, and his colleagues at NASA decided to find out where these white spots come from. Scientists have studied several hundred “spoiled” photos and analyzed where, how and when flashes occurred.

As this analysis showed, outbreaks arose both over land and over the ocean, but all of them were concentrated in that part of the planet that at that time most “directly” looked at the Sun. For example, in winter, white spots most often appeared in the tropics of the southern hemisphere, in the summer – in the corresponding part of the northern hemisphere, and in the days of the equinox – at the equator.

Such a wandering of outbreaks caused scientists to recall the old story that they investigated almost 20 years ago, studying the Earth images received by the Galileo probe on the way to Jupiter. They, as Marshak recalls, also had white spots, which his team considered as a product of reflection of the sun’s rays from ice particles floating in the atmosphere of the Earth.

At that time no one believed in the scientists, because there were no additional photographs with similar spots, but now Marshak and his colleagues had an opportunity to test their hypothesis using DSCOVR images and a computer model of the Earth’s atmosphere.

As these calculations have shown, white spots in photos from the NASA climate probe and Galileo images are generated by ice particles in the tropospheric clouds of the Earth, soaring at a height of five kilometers. Many microscopic icicles in cirrus clouds, scientists explain, will be turned horizontally to the surface of the Earth, which will turn them into a kind of mirror that reflects the rays of the star into space.

Such reflections, as scientists believe, can be used to search for distant planets and assess their suitability for life. The light of stars, reflected from the particles of ice in the atmosphere of exoplanets, will be brighter than the emission of the planet itself, and in its spectrum, as scientists explain, there will be all the necessary information on the chemical composition of the atmosphere and the potential presence of life in it.