Mystery of a winter solstice and Irish barrow 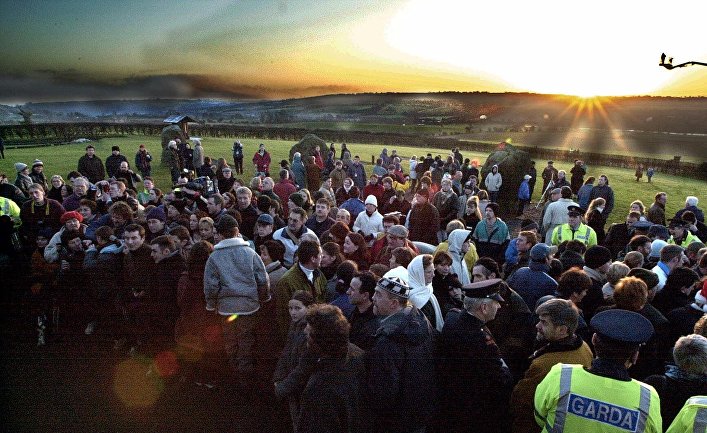 It is one of the least known wonders of the world. Thrown and dilapidated, it vegetated nearly 5000 years in the Irish rural areas. But the archeologist enthusiast found this structure which secrets are revealed all once a year — in day of a winter solstice.

The turn came true! Within six months from the middle of summer day became shorter. But here it is time a winter solstice, and it means that the sun is in the lowest point, and there came the shortest day in a year. And to the North from a polar circle the sun generally isn’t shown over the horizon.

The winter solstice was celebrated since prehistoric times. Today it matches merry Christmas plus or minus a couple of days. The reason — the error in calculations noticed in 325.

The best place in a pattern for celebration of a winter solstice — a barrow of the Stone Age the Newgrange in Ireland constructed in the Neolithic era 4500-5000 years ago.

But our history began in 1961. The ancient structure of the Stone Age Newgrange, or Bru-na-Boyn, lay in ruins. Witnesses understood that once it was something outstanding — the building, the tomb, whose age probably exceeds an age of the Egyptian pyramids and Stonehenge. Something created by the Celtic god of the sun Dagda.

Among visitors of ruins there was professor of archeology Michael Dzh. Michael J O’Kelly who understood directly that Newgrange needs to be researched and, perhaps, to restore.

Operations started in 1962 and as a result led to surprising opening. During O’Kelly’s expedition learned that though the monument and lies in ruins, about him the set of beliefs walks. It agrees one of legends, the tomb of Newgrange hid a secret which could be solved only in one day in a year.

This day the sun lights the long course in the building and lays down on a stone in distant end of a corridor.

But when? Whether honestly it or only one of myths?

At first O’Kelly decided that the wonder of the world shall occur in day of a summer solstice. But any living person didn’t see a phenomenon with own eyes.

On December 21, 1967 became in the afternoon when archeologists at last cleared away all pass through the building. Early in the morning O’Kelly went to Newgrange and, having entered location, stopped right in the middle a dark corridor. It was given there by an intuition, but whether she was mistaken? 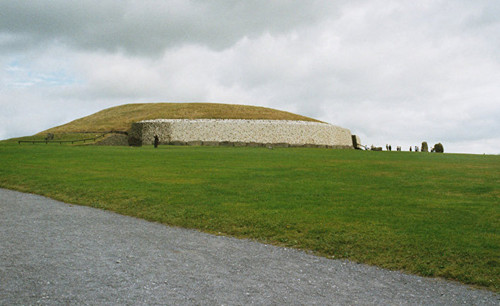 Barrow of the Stone Age Newgrange in Ireland

It was necessary only to wait for sunrise. Whether the myth is truthful? Whether pass will light the sun? Or it will set the mechanism which will bring down a ceiling in motion, and he will bury under himself O’Kelly?

The sun seemed at 08:58. Everything has occurred very quickly.

“To surprise of professor O’Kelly, the room and pass were lit. Sunshine were stretched along walls and have lit up everything around. All room, walls, a floor, six-meter ceilings bathed in beams of the sun” — one of descriptions of events of 1967 says.

O’Kelly has frozen, stunned and fascinated by what has seen in Newgrange.

“Then he was captured by fear that god of the sun Dagda, the builder of a tomb, will bring down ceilings to him on the head”.

Fortunately, Dagda wasn’t going to do it. Leaving Newgrange, professor watched also how beams of the sun left a structure.

Who has constructed Newgrange?

“We don’t know” — Muiris Ó Súilleabháin from University college of Dublin on the page of Newgrange answers this question.

Construction of monuments of this kind demanded big the number of labor and very long time that means that big settlements nearby had to be formed. If archeologists have found these settlements, it would become much simpler to understand why Newgrange has been constructed.

“No, nearby there are no signs of large settlements or villages” — professor denies.
In other words, Newgrange in all its gloss and accuracy will remain for us a riddle for a long time.

For all who want to see Newgrange in day of a winter solstice every year will organize a lottery which happy winner enters into group of 20 people observing a solar phenomenon. Chances to receive the ticket are small. In 2016 applications from 32 682 people have arrived. And to have an opportunity to enter, it is necessary also to be registered on the place.

What is the winter solstice?

It as a summer solstice, only on the contrary — the shortest day in a year when the sun is on the lowest point. In the northern hemisphere the winter solstice occurs on December 21-23 when the sun appears in a zenith over the Tropic of Capricorn.

It is easy to guess that this day was celebrated on all northern hemisphere. More dark won’t be any more, ahead — lighter times.

Ancient Rome noted a winter solstice in a big way. Festivals arranged the whole week, prayed to Saturn and other gods of fertility. In Judaism a winter solstice — it the first day “tekufot-tevt” when it is impossible to drink the water which is stored in the house. In antique Persia solar god Mitra was esteemed. Vikings celebrated йоль which could coincide both with a solstice, and with pagan Christmas of Germans.

There is one more question: why Christmas is celebrated not in day of a winter solstice? The reason — in the calendar mistake known since the 4th century.

When in 45 years before our era the Julian calendar has been entered, the winter solstice just dropped out for December 25. But in a calendar the mistake has crept in. In spite of the fact that every fourth year was leap, the winter solstice began to move approximately for one day ago each hundred years. In 325 the first Nicaean cathedral it fell on December 22. And in 1500 in general has moved for December 12. It was necessary to do something with it!

Everything was corrected by the Gregorian calendar in Sweden entered in 1753. At that moment have just cancelled the last 11 days of February in confidence that at the time of the Nicaean cathedral of 325 everything was as it should be. Everyone who has gone to bed in the evening on February 17 has woken up on March 1.

The problem was solved, having adjusted system of leap-years. Throughout many centuries people refused February 29, except for years, multiple to four hundred. Easily and just, isn’t it?