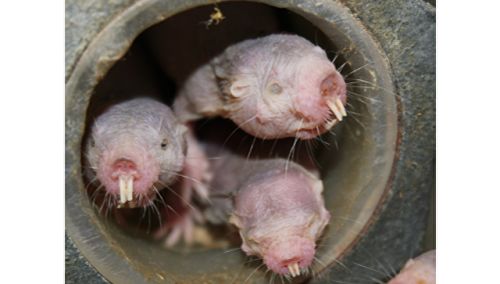 Naked diggers, “immortal” African rodents, can survive up to 20 minutes of complete deprivation of oxygen due to the ability of their cells to use pure fructose to provide themselves with energy, which makes them related to plants, according to an article published in the journal Science.

“We were the first to show that at least one mammal can switch from glucose metabolism to fructose in the absence of oxygen.Our brain and other organs are irreversibly damaged a couple of minutes after a cardiac arrest or stroke.Since the DNA of mice and naked excavators at 94 % Is identical, it is quite possible that we will be able to “borrow” this unusual metabolism in the future, “said Gary Lewin of the Center for Molecular Medicine in Berlin, Germany.

The naked digger (Heterocephalus glaber) is a unique mammal with many amazing properties. This hairless, underground rodent, about the size of a mouse and weighing 30-50 grams, lives in eastern Africa. In the 1970s, scientists discovered that these creatures live unusually long for their size and are not prone to cancer. In addition, excavators practically do not feel pain and do not react to skin irritation with acids.

The diggers form underground colonies of several dozen individuals headed by the female – “queen”, the only individual that produces offspring in the colony. All other members of the colony remain in the position of workers and do not participate in reproduction, since their reproductive organs are not capable of producing offspring. Such a social structure is common for bees and ants, but a rare case in mammals.

According to Levin, excavators have one more “superpower” – they easily tolerate lack of oxygen and survive even when they are completely deprived of access to oxygen for 18-20 minutes. According to the biologist, even after this time the diggers do not experience any health problems and their bodies do not mass kill cells.

Why they need this skill is not a secret – the diggers live in narrow and “overpopulated” tunnels and labyrinths, where the concentration of oxygen is always below the norm. On the other hand, how exactly they manage to survive in such conditions was not known and remained the subject of controversy among scientists.

Levin and his colleagues decided to uncover this mystery by placing several excavators from the Berlin colony of these rodents in special cells where the oxygen concentration could be flexibly controlled and followed how their body’s work changed with a decrease in the O2 fraction in the air to zero and its return To normal values.

It turned out that the diggers use several techniques to protect themselves from lack of oxygen. First, the rate of their metabolism decreases with the lack of O2, and in time, approximately five hours after it falls to the deadly values ​​for humans, these rodents fall into anabiosis.

Secondly, the diggers were once again the most unique animals on Earth. As scientists have found out, in cells from the brain and all the other organs of these rodents, there is a special set of enzymes that allows them to eat not fructose, but glucose. The decomposition of fructose, unlike glucose, does not require oxygen, which allows the cells to survive for over an hour, switching to an alternative food source.

Interestingly, in other mammals, only liver and intestinal cells can absorb glucose, and other organs and tissues do not have this ability. In this respect, the naked diggers are much closer to plants than to animals, since the decomposition of fructose is one of the main ways to extract energy from nutrients for the flora. Accordingly, we can say that the digger temporarily turns into a “plant”, trying to survive with a lack of oxygen.