NASA has conducted a parachute test for landing on Mars 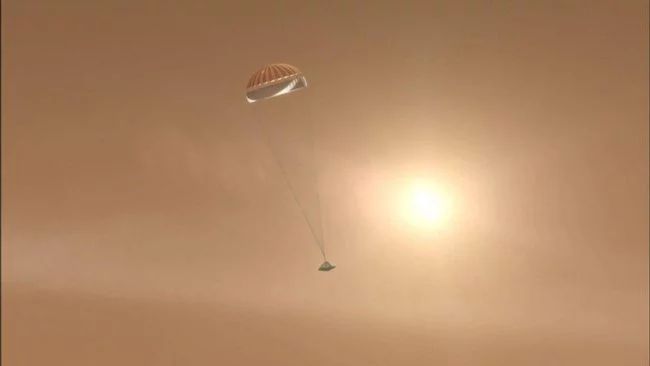 At the moment, the US aerospace agency NASA is preparing for Mars Mars 2020 mission. As part of the planned test series, the third (and final) test phase of the Advanced Supersonic Parachute Inflation Research Experiment (ASPIRE) system has recently passed, which should help the aircraft to make a safe landing on the surface fourth planet from the sun.

During a series of tests, two different parachutes were evaluated. The first was almost the exact mine of the parachute, which was used in 2012 for landing the Martian scientific laboratory. The second one was reinforced with various materials like nylon and kevlar fibers. Most likely, the second option will be used in the upcoming mission, since the weight of the cargo will significantly exceed the one that was delivered in 2012.

“Mars 2020 will carry the heaviest payload of all that has ever been delivered to the surface of Mars. ASPIRE tests have shown how our parachute will behave when it is first deployed in a supersonic flow high above Mars. And it looks just fine. ”Said Mars 2020 project manager John McNeemy.

The load on the parachute system during the tests was the highest possible and amounted to about 37,000 kilograms. And this is 85% higher than scientists expected in advance. The parachute was mounted on a Black Brant IX rocket and sustained its weight. According to the technical project manager for the development of ASPIRE, Jan Clark,

“The Earth’s atmosphere near the surface is much denser than that on the surface of Mars, about 100 times. But at an altitude of about 37 kilometers, its density is very similar to that where on Mars a parachute should work. It was under these conditions that they were tested. ”

The start of the Mars 2020 mission is scheduled for 2020, and equipment will land on the surface of the red planet in February 2021.