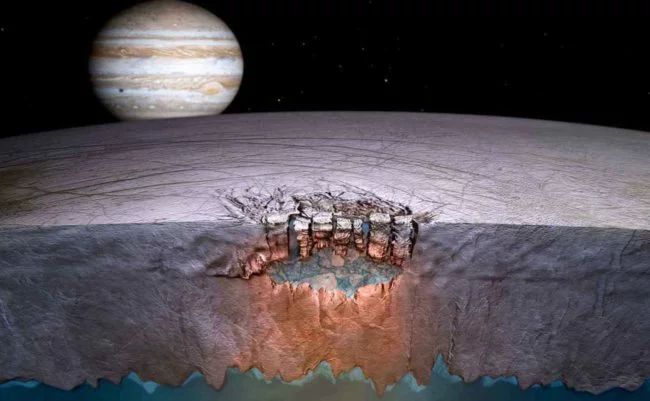 During the numerous missions to the satellite of Jupiter Europe, it was suggested that under the thick layer of ice of the moon there could be an unhardened ocean, which means that there could potentially be life or at least evidence of its presence in the past. In order to check this, you need to somehow get under the edge of the ice and the US space agency NASA, quite possibly, figured out how to do it.

In general, researchers even know the intended place where you can try to break through the ice and take samples. It lacks only technology.

“According to various estimates, the thickness of the ice cover varies from 2 to 30 kilometers, which is the main obstacle to the study. The planting module should have the technology of drilling such deep wells to explore uncharted areas. ”Said Andrew Dombard, one of the project participants to solve this problem, from the University of Illinois at Chicago.

At the moment, NASA has assembled a group of scientists and engineers who are developing the concept of a “tunnel bot” capable of drilling ice in Europe. A distinctive feature of the robot should be nuclear fuel, which will provide it with the necessary energy.

“We focused on how the bot will work during the descent. He should be able not only to pass through the ice, but also to work on the ice-water interface. The bot should also be able to search for liquid water “lakes” in an ice shell. ”

At the moment, scientists are considering two design concepts: in the first case, radioactive fuel cells will be located on board, and the second provides for the installation of a compact nuclear reactor. At the same time, the heat during operation of the bot is dissipated and can be used to melt the ice shell.