NASA plans to drill the ice surface of Europa 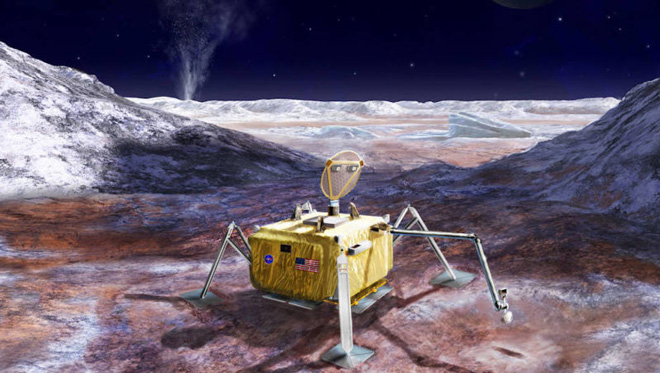 Starting in 2016, NASA assembled a Team to determine the scientific goals have been busy drawing up a plan for sending a robotic probe on Europe, the icy moon of Jupiter, which is at a distance of 627 million km from Earth. On 7 February the team announced its first report to NASA, describing in detail its recommendations for a future mission that will search for life on Europa, proburivaja to the underground ocean. The team hopes to launch a spacecraft to the Jupiter moon already by 2031.

The project is not to be confused with the mission’s approach to Europe, which NASA has scheduled for early 2020-ies. The approach will play an important role for later “landing” mission, because during it the camera will scout out plumes of gas or cracks, which indicate that under the surface of Europa leaves the material. Later, the lander will visit these places to get samples.
The understanding of the structure of the surface of Europa and what is under it, will help researchers plan for future landing mission on a celestial body.

The first reliable evidence of the existence of an underground ocean on Europa came from missions Galileo NASA, which studied Jupiter and its moons in the late 1990-ies. But no one has ever taken samples from the ocean, which is buried under the ice layer of 19-27 km. of the Ocean consisting of liquid water and an unknown amount of salt reaches the depth of 100 km.

Team definition of the scientific objectives, along with NASA engineers have developed a device that can drill a 10 cm ice cover. So it will be possible to obtain samples to be analyzed for the presence of signs of life.

If lander can handle the job, the future of the mission to Europe will be to drill even deeper and, perhaps, even reach the underground ocean. The team recommends that in addition to the drill or cutter for obtaining samples, the apparatus was also equipped with cameras for surveillance, tools for analysis of the chemical composition of the icy crust of Europe and instruments for monitoring geological activity, for example, seismostation.