NASA scientists recognize 2018 as the fourth hottest year in history 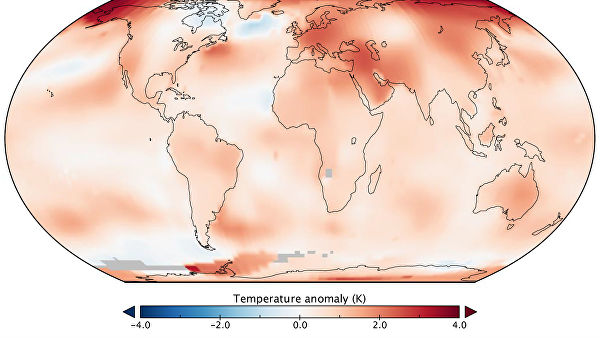 Last year could not break the record for record high temperatures, set in 2016, but entered the top four of the hottest seasons in the entire history of observations, NASA representatives said at a press conference at the Goddard Institute of Space Research.

“Last year was another extremely hot season, which additionally superimposed on long-term global warming. Its effects can already be seen and felt, starting with floods off the coast of the United States and ending with heat waves, unusually high rainfall and shifts in ecosystems,” said Gavin Schmidt , Director, Space Research Institute, NASA Goddard (USA).

Since 2015, the average temperature on Earth has constantly set new records every month, exceeding the norm by 1-1.5 degrees Celsius. The situation was especially serious in the first five months and in August 2016, when typical temperatures in the Arctic and in some regions of Russia were above the norm by 5-9 degrees.

Over the past two years, these trends have become somewhat less alarming, due to changes in the nature of the El Niño climate phenomenon, whose unusually high level of activity warmed the waters of the Pacific Ocean three years ago. These changes, contrary to the expectations of scientists, did not stop a series of records, and 2017 and 2018 are not much inferior to the record holders of recent years.

On average, the temperatures on Earth last year, as shown by NASA observations, were approximately 0.83 degrees Celsius typical for the 20th century. As in past seasons, warming has affected almost all regions of the Earth, but the extent of these changes was quite different.

Most of all these changes were felt by residents of Eastern Siberia, the Arctic, Central Europe and the Middle East, where average temperatures set new records and exceeded the norm by about 2-5 degrees Celsius. On the other hand, temperatures did not rise, but markedly decreased in the Russian Urals, in Canada and in Kazakhstan.

Four other climate organizations came to similar conclusions – the US Oceanic and Atmospheric Administration (NOAA), the British Meteorological Organization (Met Office), and the climate projects of the University of Berkeley in California and the University of York.

Their observations showed that 2018 is in the top four of the warmest annual cycles, second only to 2017, 2015 and 2016. For some months, for example, for December, last year was either the absolute leader, or ranked second in this ranking, and none of them fell below the fifth line.

As Schmidt explained in an interview with RIA Novosti, last year’s volcanic eruptions, including the November and January emissions of ash and soot from Agung volcano in Bali, did not slow down global warming and did not affect the climate as a whole, since they did not reach the stratosphere.

“For me it was not just an interesting scientific question – my sister lives not far from the volcano, and therefore I watched its condition very closely. Now we can say that its eruption and other similar events threw out too little sulfur dioxide and to a too small height, so that they can influence the climate of the next few years, “said the scientist.

According to him, NASA experts continue to monitor the situation in Bali and other geological “hot spots”. If something more serious happens there, climatologists will quickly begin to study the potential consequences of such cataclysms and clarify their predictions for next year.

New temperature records, as Schmidt added, do not carry anything good for the state of permafrost in the Russian, Canadian, American and European Arctic. Its melting will accelerate greatly in the coming years, which will lead to the release of large amounts of greenhouse gases from the former frozen soil and accelerate global warming.