NASA showed how “breathing” the Earth 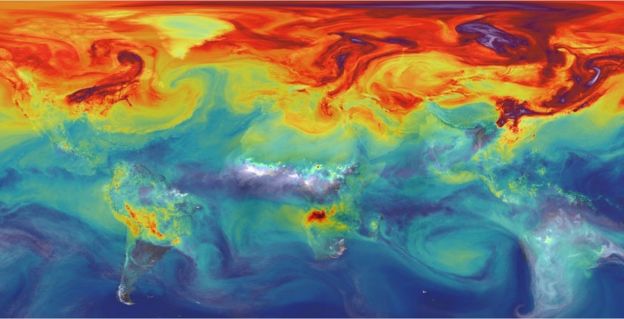 The American aerospace agency released a video that shows how the Earth literally breathes, regulating the level of carbon dioxide in the atmosphere.

NASA’s Orbiting Carbon Observatory (OCO, in translation from English – the orbiting carbon observatory) monitored the movement of gas in 2015-2016. It was during this period that the next El Niño cycle was in full swing on the planet.

As a result of this climatic phenomenon, the amount of CO2 significantly increased in the atmosphere. The OCO satellite managed to show how the rainforest reacted to this increase, which was forced to experience a serious drought. The ability of forests to reduce the level of carbon dioxide, some of which fell into the Earth’s atmosphere as a result of human activities, has seriously decreased.

For the scientific world, this study, whose results were recently published in the journal Science, is of great importance, because it is expected that in the conditions of global warming, El Niño will become more common.

“If the future climatic conditions are more similar to the recent El Niño, a problem will arise: the Earth may actually lose some of the properties of the rain forests for carbon removal, and then the CO2 level in the atmosphere will rise even faster,” explains Scott Denning, member of the scientific team of the OCO mission from the University of Colorado at Fort Collins. According to the scientist, this will lead to even more warming on the planet.

Recall that the El Niño 2015-2016 period was one of the strongest in history, which became apparent from the recorded increase in CO2 levels. Typically, the gas concentration in the atmosphere is increased every year by about two parts per million by volume (ppmv) of air molecules, which is equivalent to an additional four gigatonnes of CO2. Currently, their volume is just over 400 ppmv. However, during the last El Niño cycle, the jump was 3 ppmv, or six gigatons of destructive gas.

Such growth rates of CO2 in the Earth’s atmosphere have not been observed for 2000 years. However, during the period under review, anthropogenic emissions of carbon dioxide remained virtually unchanged. This means that the reason is some kind of non-human-induced malfunction in the process of removing CO2 from the atmosphere.

It was thanks to the OCO satellite that this connection was discovered. So, at this time in South America, the most severe drought in the last 30 years has reduced the ability of vegetation to consume CO2. In Africa, an increase in the average temperature increased the scale of decomposition of plant material, as a result of which carbon dioxide is also released into the atmosphere.

In parallel, in Asia, especially in Indonesia, because of the harsh heat, forest fires on peatlands raged, resulting in the release of carbon accumulated over thousands of years. Taken together, these processes led to such a sharp jump in the CO2 content in the Earth’s atmosphere.

Meanwhile, in Europe, soon plans to launch a whole network of satellites Sentinel-7, which will cover a larger area than OCO, while retaining high accuracy of measurements. Thanks to S7, scientists will be able to more closely monitor sources and sinks of carbon dioxide.

Moreover, it is argued that such an orbital network will also help convince individual states to take additional measures to reduce carbon emissions in accordance with international agreements, such as the 2015 Paris Climate Agreement.