Nature will not allow the Earth to become covered with ice 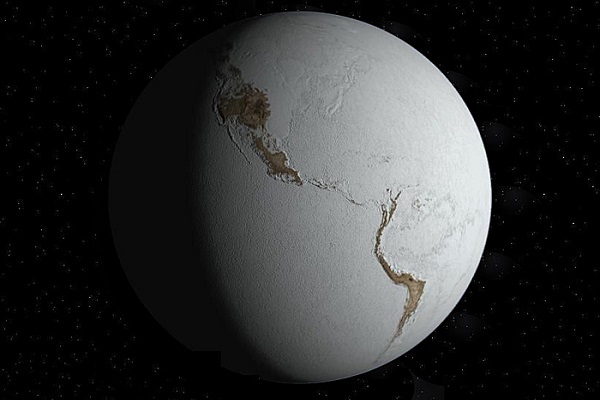 Scientists believe that they learned something important about glacial periods. In conditions where the carbon dioxide content in the atmosphere drops to a new low and the glaciers begin to move from the poles to the moderate latitudes, a mechanism must be put in place that will stop this process and the Earth will not completely cover itself with ice.

There is evidence that in the distant past our planet was already experiencing complete glaciation, when the glaciers reached equatorial latitudes. They are based on the hypothesis of “Earth-snowball”, voiced half a century ago. It is assumed that the last such era came more than 700 million years ago, even before the ocean and land were inhabited by complex biological organisms. Here, researchers approach the fundamental questions of geophysics. Long before the appearance of man, the glacial periods gave way to warmer periods. The glaciers were advancing and receding, the concentration of carbon dioxide in the atmosphere was falling and rising. What was the cause of these changes, in many ways remains a mystery.

Among the factors responsible for the alternation of cold and warm periods in the history of the Earth, most often called astronomical and geological. The precession and nutation of the earth’s axis and fluctuations in the eccentricity of the Earth’s orbit are regarded as astronomical. Geological includes volcanic activity, mountain building and the movement of continents. Recent research provides a basis for considering, along with them, also the biological factors of climate change.

Scientists from the Autonomous University of Barcelona in an article in the journal Nature Geoscience reported an important discovery. They measured the content of carbon dioxide in the ice cores and determined its lowest level.

The researchers found that for the last 800 thousand years the concentration of atmospheric CO2 most of the time fluctuated around the level of 190 parts per million and practically did not fall below. This unexpected result indicates that such a very low concentration of CO2 was fairly stable. Moreover, it is known that in the distant geological past the CO2 content often increased, but there is no data that it ever fell below these.

Scientists cautiously suggest that the role of the biosphere could play a role in containing a sharp drop in temperature on Earth. At very low CO2 levels, photosynthesis in plants and plankton was difficult, slowing their growth. As a result, in soil and ocean, the amount of carbon dioxide had to decrease, and in the atmosphere to increase, enhancing the greenhouse effect. If this is true, then life itself acts as a regulator, not allowing the planet to cool too much. The result is in favor of the Gaia hypothesis, put forward almost forty years ago by the British, James Lovelock. The scientist claimed that living organisms, acting collectively but not consciously, ensure the maintenance of stable environmental conditions through various feedback mechanisms.

Thus, in the regulation of climate, the biological factor is more important than geological. It is known that for hundreds of thousands of years the CO2 content in the atmosphere changes for counting for stable periods of only a few thousand years. Therefore, at a very low level of CO2, some other mechanism must be switched on.

Now, when climatologists have established the existence of the lower limit of the level of carbon dioxide in the atmosphere, the catastrophic glaciation of the Earth seems unlikely.