Neanderthal ribcage has been barrel-shaped since birth 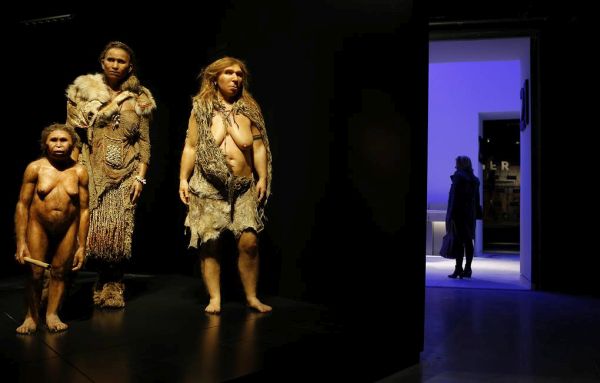 The study of the structure of bones from the caves of the Caucasus, Syria and France made it possible to partially learn the appearance of Neanderthal children. It turned out that the Neanderthals from the first days of life had a barrel-shaped chest, the researchers write in the scientific journal Science Advances.

“With the help of virtual reconstruction systems and morphometric methods, we learned how the ribcage of Neanderthal children from the first days of life to three years old was arranged. It turned out that the ribcage in Neanderthals was barrel-shaped from birth. damn. Probably, this was due to the fact that they needed more energy and oxygen compared to our ancestors, “- write the scientists.

Neanderthals lived in Eurasia much longer than Homo sapiens. Over hundreds of thousands of years of existence, they have adapted to the harsh conditions of the glacial era.

For example, the hands of the Neanderthals were adapted to deliver powerful blows with a spear, and the barrel-shaped chest allowed them to breathe deeper, more easily endure long and heavy physical activity and survive strong blows from the hooves and paws of animals, as well as enemies. Other unusual traits of Neanderthals, such as their particularly large and fleshy nose, were recently discovered by genetics by accident.

Scientists are particularly interested in how and when these traits arose and whether they were in Neanderthals in childhood. This shows whether the developmental trajectories of different representatives of the genus Homo differed. In particular, anthropologists led by a researcher at the University of Bordeaux (France) Daniel Garcia-Martinez decided to study whether Neanderthals had a barrel chest in the first years of life.

To do this, scientists studied four partial skeletons of Neanderthal children from the Russian Mezmay cave in the Caucasus, Dederia caves in northern Syria and Roque de Marsal in southern France, as well as at the Mousterian site of ancient people in France. Scientists note that they all died at the very beginning of their life, as indicated by the size of the bones and the non-fused “seams” between them.

The remains of Neanderthal children have survived to this day in a badly damaged form. Previously, because of this, scientists could not accurately reconstruct their appearance and understand what their skeleton looked like during life. Garcia-Martinez and his colleagues solved this problem by creating virtual copies of their bones, comparing them with each other and using this data to reconstruct the chest and other skeletal parts of young Homo neanderthalensis.

As it turned out, the chest volume in Neanderthal children was significantly larger than in newborn infants and Homo sapiens children of the same age. At the same time, it was much shorter, but wider and deeper. In general, this repeats how the structure of the chest differs in adult representatives of both species.

In general, the degree of differences in the structure of the chest in Homo sapiens and Homo neanderthalensis was the same for all ages, which indicates a similar program of their growth. On the other hand, the volume of the chest of Neanderthals increased somewhat faster as they grew, compared to how the anatomy of this part of the body changes in modern and ancient Homo sapiens.

Scientists suggest that this suggests that the differences in its shape and size were indeed associated with the fact that Homo neanderthalensis lived in conditions where they had to spend a lot of energy and physical effort to survive. How this feature of their physiology could have influenced the extinction of the Neandertzals remains to be seen by anthropologists.