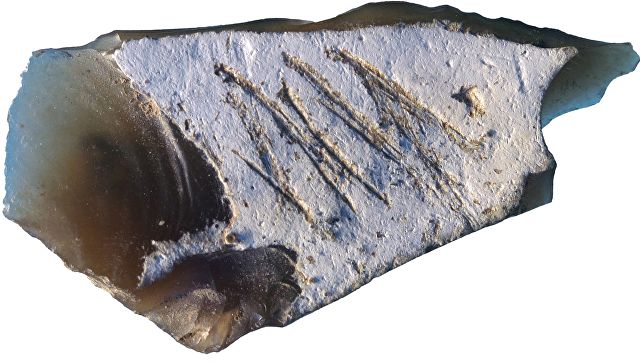 A peculiar” signature “of the Neanderthal master on the stone tools found on the territory of Crimea pointed to the Neanderthals’ ability to think abstractly.

“Three-dimensional pictures of these scratches on the surface of the cut say that they appeared on it is not accidental, but were applied by a skilled master with the help of two different tools. To do this, given the small size of the subject, it was quite difficult. This speaks in favor of the fact that this figure was the identification mark of the master”, — write Vadim Stepanchuk from the Institute of archaeology of NASU in Kiev (Ukraine) and his colleagues.

For a long time anthropologists and paleontologists believed that Neanderthals, the European “cousins” of our ancestors, much inferior to them in cultural development, not having the gift of speech, culture, religion and even the ability to ignite the fire. Over the past five years, all of these turned out to be myths have been successfully broken new findings in Croatia, Israel and Spain.

For example, recently scientists discovered necklaces made by Neanderthals, as well as various samples of Neanderthal rock art, and found that these ancient people collected stones, were able to cook various decoctions for the treatment of diseases and to draw abstract tattoos, use “chemistry” to ignite fires and had quite complex funeral rites.

Over the past few decades, as noted by Stepanchuk and his colleagues, archaeologists from all over Europe found dozens of tools made by Neanderthals, which were attended by various scratches and structures similar to the drawings. Anthropologists argue for a long time whether these patterns arose by accident or were left by the creators of these instruments.

The authors found the answer to this question, studying Neanderthal artifacts found in the cave of Kiik-Koba, one of the most famous sites of ancient people in the Crimea. It was completely excavated in Soviet times, and the cuttings, cores and other tools found in it, as well as the remains of an adult Neanderthal and a child were repeatedly studied and sorted by Russian and Ukrainian researchers.

On one of tools of work found near their remains, scientists noticed a set from parallel scratches which forced Stepanchuk and his colleagues to think how they could appear on a stone surface. To answer this question, anthropologists created an exact three-dimensional model of rubil and tried to understand exactly how these lines appeared.

Their calculations showed that these scratches could not occur on the surface of the stone at random. They were too smooth and clear for them to appear during the use of this chipper or in its manufacture.

In addition, as the scientists discovered, all the lines were drawn on the stone with two different tips that moved along the surface of the cut in the same direction and in the same manner. All this suggests that the master purposefully applied them and that he used such marks as a kind of “quality mark” or a mark of rubil’s accessory.

If this is true, then this figure once again, as the authors conclude, indicates that the Neanderthals were not deprived of abstract thinking and were not inferior in this respect to the ancestors of modern people.