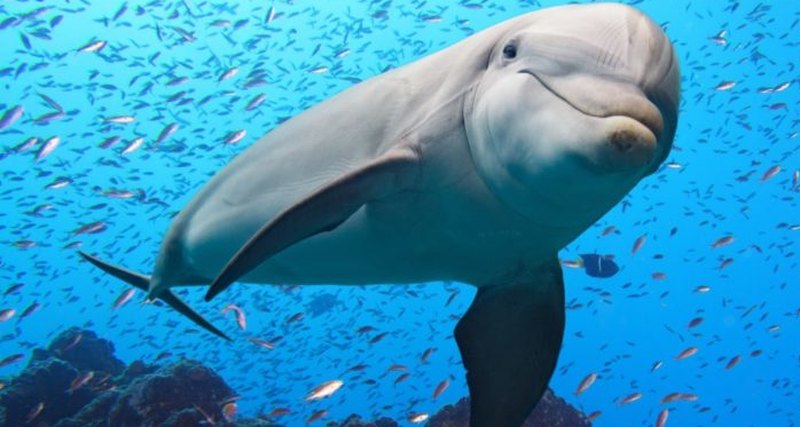 Offshore British Columbia, Canadian oceanographers have noticed unusual for these northern edges of visitors – bottlenose dolphins, which usually do not swim to the Canadian coast and prefer warmer waters.

Off the coast of British Columbia this year, unusual visitors to these northern edges – bottlenose dolphins, who usually do not swim to the Canadian coast and prefer warmer waters, were noticed.

Luke Halpin, one of the authors of the study, first noticed a group of 200 bottlenose dolphins in the summer, at the end of July, 200 kilometers from Vancouver Island off the southwest coast of Canada. This is about a thousand kilometers north of the northern border of their habitat, “the scientist usually explains, bottlenose dolphins are not Canadian, but California beaches.” The northward shift of the range is probably due to the warming of the ocean. “In recent years, in the northern waters, find fish and crustaceans, characteristic of the southern waters, followed by predators such as bottlenose dolphins.

At the advent of bottlenose dolphins to the coast of Alaska, most likely, a huge array of warm water in the Gulf of Alaska is to blame. He was observed from 2013 to 2016, but in 2017 – no longer, so dolphins could not follow him. But, although there is no warm bubble in the bay, the water temperature this year and without it is two degrees higher than usual (16.5 ℃ in July). However, it is possible that dolphins swam to the northern latitudes of the Pacific Ocean before, but people did not see them.

Along with them, seven dozen orcas sailed north, which is not surprising: bottlenose dolphins like the company of other cetaceans. “The Pacific Ocean is warming, the climate is changing. In the environment, everything is changeable, and the bottlenose dolphins on the Canadian shores once again demonstrate this to us, “- says another author of the work, Jared Towers.