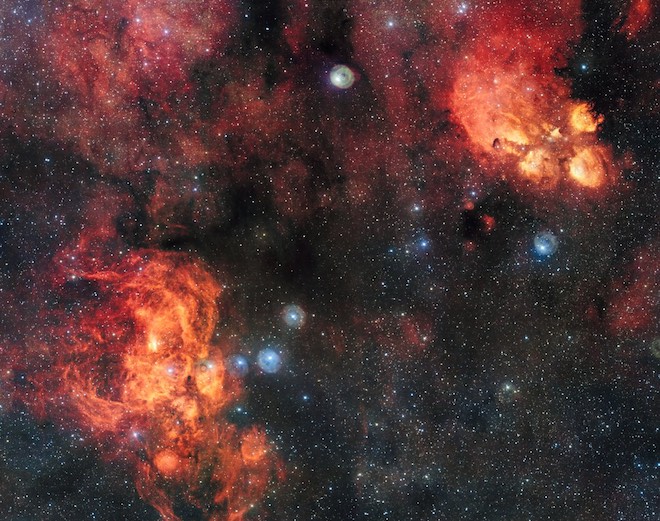 Astronomers have long studied the glowing dust cloud, catalogued as NGC 6334 and NGC 6357. Due to its expressive forms of the nebula called the Cat’s paw and lobster.

A new photo of clouds taken with a telescope VLT Survey Telescope. Its resolution is about two billion pixels. This is one of the biggest image ever released by the European southern Observatory (ESO).

NGC 6334 lies about 5500 light years from Earth, NGC 6357 is removed from us at 8000 light years. Both nebula located in the constellation of Scorpio, close to the poisonous tip of his tail.

British scientist John Herschel first observed the traces of these objects, two nights in a row in June, 1837, during his three-year expedition to the Cape of Good Hope in South Africa. Then in the conditions of limited telescopic power of the nebula was documented only partially. Only after many decades of their forms were clearly visible in the photos.

Thanks to the power of the VLT OmegaCAM camera received a new image with a resolution 49511×39136 pixels — one of the largest ever released by ESO.

But despite the modern tools, the accumulation of dust in these nebulae are so dense that much of them remains hidden to us. Nebula Cat’s paw — a place of active star formation. However, the light of thousands of young stars are not able to reach the Ground. Only by observing in the infrared using telescopes such as VISTA, you can look through the dust inside these stellar nurseries.

Viewing nebulae in different wavelengths of light result in different visual perceptions on the part of the observer. When viewed in infrared light wavelengths, then, for example, one part of NGC 6357 is reminiscent of a dove and the other a skull. In this regard, it is also called the nebula War and peace.