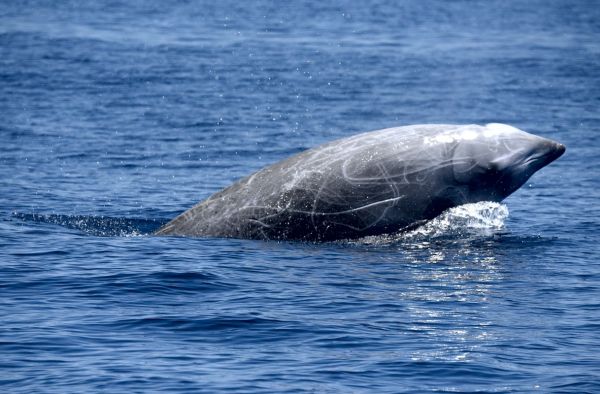 Observations of the beaked beak in the North Atlantic Ocean showed that these modest cetaceans spend an average of about an hour under water per dive, and the record dive lasted more than 3.5 hours.

Cuvier beaked whales (Ziphius cavirostris) are one of the most mysterious cetacean species. Cautious, medium (for whales) in size and outwardly almost inconspicuous, they are nevertheless common in all oceans except the Arctic. Their excellent diving abilities also contribute to their stealth. These animals are considered the record holders for the depth and duration of diving among all marine mammals and escape from their main enemies, killer whales, going into depths inaccessible to those.

Beakbeak behavior has been observed for several years by Nicola Quick of Duke University and her colleagues working off the Atlantic coast of North America. By tagging the animals, they tracked the depth and duration of the dives, as well as the length of rest sessions they needed to recuperate and breathe. While hunting deep-sea fish and molluscs, the beaked whales sometimes plunged more than 3000 meters, and one of them set a new record, holding his breath for an astonishing three hours and 42 minutes. This is reported in a new article published in the Journal of Experimental Biology.

“These animals spend very little time upstairs, so we could only work in calm seas and with the help of experienced observers,” says Quick. “They usually stay on the surface for about two minutes, so setting up the beacon required a dedicated crew and a highly maneuverable vessel.” As a result, the authors were able to tag a total of 23 beaks and track their movements from 2014 to 2018.

One of the tagged beakworms / © Andrew Read, Duke University

During this time, 3680 dives were recorded with an average duration of 59 minutes. The shortest lasted 33 minutes, the longest ones reached two hours and 13 minutes. It is known that 95 percent of marine mammals’ dives continue within their normal limits, during which their bodies are able to use oxygen and maintain aerobic respiration without going into anaerobic glycolysis. The authors estimated this time for beaks to be 77.7 minutes.

However, individual dives recorded by scientists significantly exceeded this limit. So, an individual with a tag ZcTag066 set a record, staying under water for three hours and 42 minutes. The authors note with regret that among the dives of ZcTag066 there were two more impressive ones, but they had to be ignored. These dives were recorded after the beak accidentally hit the sonar signal, which can change the normal behavior of marine animals.

Zoologists were also surprised by the behavior of beak beaks on the surface. It would seem that after especially long dives, they should rest longer, saturating cells with oxygen and restoring breathing. However, nothing of the kind was found in the collected data. So, one beaked after a two-hour dive remained on the surface for 20 minutes, and the other, after spending less than an hour and 20 minutes under water, then rested for four hours. Many physiological mechanisms that are associated with their adaptation to the longest and most economical use of oxygen reserves in the body remain a mystery.