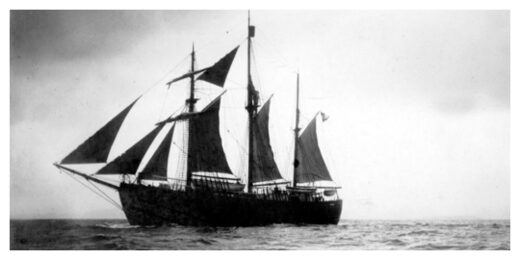 Norwegian sailors called this phenomenon dødvann – dead water. For centuries, they have known that patches of seawater in narrow fjords can mysteriously reduce a ship’s speed by dramatically slowing it down or stopping it entirely.

In his 1897 book The Far North, explorer Fridtjof Nansen wrote of his encounter with dead water north of Siberia in 1893:

Dead water, as Nansen noted, originated “where the layer of fresh water rests on the salt water of the sea,” as happens in the northern fjords, when snow and ice melt into the ocean.

Nansen’s message about dead water was studied by scientists of the time, including the Swedish oceanographer Van Walfried Ekman. In 1904, Ekman published a study that showed that dead water was caused by hidden waves in a dense subsurface layer of salt water that slowed the ship’s forward motion.

Today’s high-speed ships navigate these underwater waves with ease, and for most sailors, dead water is now largely forgotten.

But more than 100 years later, scientists are still studying the phenomenon, and new research has revealed more details about its mechanics.

In France, physicist Germaine Rousseau and his colleagues at the National Center for Scientific Research have recreated laboratory experiments conducted by Ekman using modern methods.

They also investigated another oceanographic phenomenon, first described by Ekman, in which the ship slows down several times before rushing forward – a wobble they called the “Ekman effect.”

In their experiments, the scientists dragged scale models of boats at varying speeds through fresh water reservoirs overlying salt water, evaluating how boat passage affects the surface and submarine layers.

They found that two different phenomena – the resistance of dead water described by Nansen, in particular, the Ekman effect occurs when subsurface waves are reflected from the walls of a laboratory tank and create fluctuations in the surface speed of the vessel. Russo says the Ekman effect could make it harder for slower ships to navigate narrow aisles such as fjords and sea locks.

The new study also suggests other effects of dead water. Leo Maas, a physical oceanographer at the University of Utrecht in the Netherlands, says that while the effects of these underwater waves are negligible for most modern powerboats, they can still affect swimmers as their hands often interact with deeper layers of water.

He points out that stratification of salt and fresh water can be the result of differences in water temperature, especially in hot and calm weather. “This effect may play a role in tragic cases of drowning in clear weather,” he says.

In the past, the impact of dead water and other related phenomena could have been much more significant. In fact, they could even change history.

At the Battle of Actium in 31 BC. E. Warships under the command of Octavian, Julius Caesar’s adopted son, defeated a larger fleet led by the Roman general Mark Anthony and the Egyptian queen Cleopatra.

The battle resulted in the defeat of Antony and Cleopatra and subsequent death by suicide, as well as the fact that Octavian became Augustus Caesar, the first emperor of Rome. Ancient legends blamed the loss of lotions – sucker fish, which were said to be attached to the hulls of Egyptian ships, preventing them from reaching ramming speed.

But Rousseau notes that the battle took place in a shallow strait between the Ionian Sea and the Ambracian Gulf – an almost completely enclosed sea and one of the few places in the Mediterranean where water can stratify due to salinity. Rousseau believes the Egyptian navy may have slowed down the physical effects of dead water, not fish.