New risks of traveling to Mars are revealed 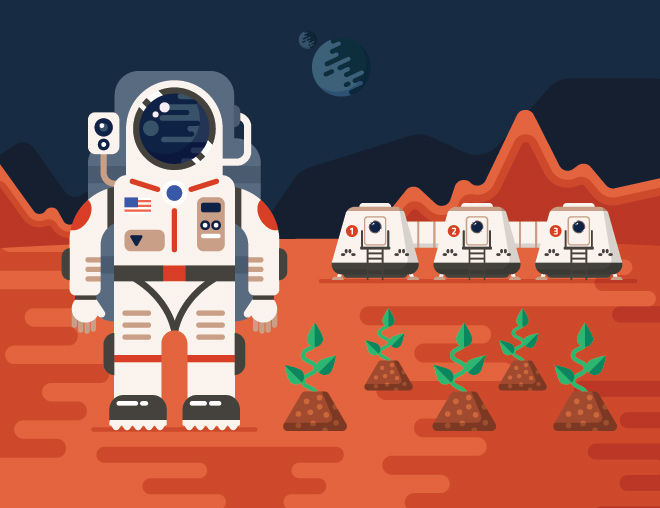 Sending a manned mission to Mars requires not only a powerful launch vehicle, but also an understanding of how a three-year space flight can affect the human body.

With funding from the National Aeronautics and Space Administration (NASA), scientists from the Wake Forest Institute for Regenerative Medicine and their colleagues used human stem cells to determine the effects of radiation in deep space.

The research team first demonstrated that radiation in distant space flights can increase the risk of developing leukemia in humans.

“I hope our experience will help NASA to assess potential risks and develop strategies for their solution,” said Christopher Porada, senior research associate of the project. Currently, the group is testing a dietary supplement that can protect astronauts from these damaging effects.

According to NASA, radiation exposure is one of the most dangerous aspects of traveling to Mars. The average distance to the Red Planet is about 200 million kilometers, and all the way can take three years.

The goal of the study, published in the journal Leukemia, was to evaluate the direct effects of radiation from solar energy particles (SEP) and galactic cosmic rays (GCR) on human hematopoietic stem cells (HSCs). These stem cells contain less than 0.1% of bone marrow, but produce many types of blood cells that circulate throughout the body and are responsible for transporting oxygen, fighting infections and eliminating any malignant cells.

For the study, stem cells of healthy donors were taken at the age of astronauts (30-55 years). During the experiment, they were exposed to protons and iron ions at doses characteristic of deep space. Then, laboratory and experimental studies were conducted to determine the effects of irradiation.

“We found that radiation reduced the ability of HSC cells to produce almost all types of blood cells by 60-80%,” said Porada. “It can lead to a strong weakening of the immune system and anemia during long missions in deep space.”

At the next stage, scientists evaluated how cells will function in the body. The mice were transplanted with irradiated human HSC cells, actually “humanizing” the animals. As a result, they developed acute lymphoblastic leukemia.

“Irradiation can increase the risk of developing leukemia,” concluded Porada. “In addition, radiation has affected the HSC’s ability to generate types of leukocytes involved in fighting foreign invaders, such as infections or tumor cells, which can reduce the ability of the immune system to eliminate malignant cells resulting from radiation-induced mutations.”

According to Porad, the results are especially alarming given previous studies showing that microgravity conditions can also cause noticeable changes in the immune system even after short missions in low Earth orbit, where cosmonauts are largely protected from radiation. The combined effects of microgravity and radiation can exacerbate the risk of immune dysfunction and cancer.

Make the space mission as safe as possible called the Human Research Program of the NASA (Human Research Program). It explores not only the effects of radiation, but also the conditions of microgravity, isolation and limitations in enclosed environments far from the Earth.