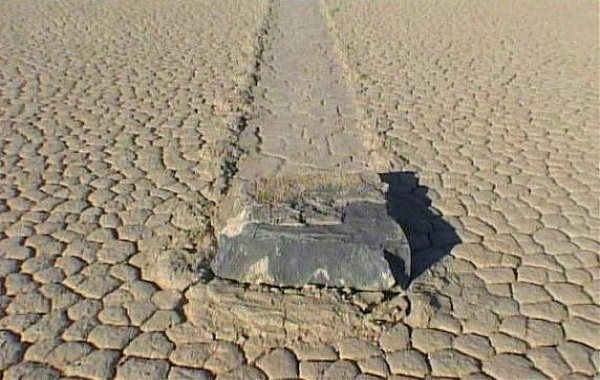 For decades scientists could not understand what causes the stones, leaving behind a trail at the bottom of the dry lake. Racetrack Playa is surrounded by mountains, a dried-up lake in the national Park Death Valley. In the summer its bottom is covered with cracks in winter ice, snow.

But the most entertaining part of the landscape — dozens of scattered stones, each of which stretches the groove. Some signs represent a direct meter line, other — zigzag with a length of more than 120 meters.

To find a scientific explanation for moving rocks, scientists have tried many times. In 1948, geologists Jim McAllister and Allen Agnew decided that the movement caused by dust storms, combined with periodic flooding of the dry lake. Another popular theory was reduced to the appearance of ice on the bottom of the dried lake in the winter. In the early 1970s, geologists Robert sharp and Dwight Carey was surrounded by stones and wooden pegs, suggesting that the ice will freeze to immobilize him and the stones. And yet some of the stones managed to get around obstacles.

Despite the fact that geologists often visited the Racetrack-Playa, to catch the process of moving rocks, they could not. From 1987 to 1994 Professor at Hampshire College John reed annually bring groups of students into the Valley of Death to study the stones. He had his own theory about them: since many of the traces were parallel, he believed that the stones were moved inside large chunks of ice that slid under the influence of strong winds. But this theory crashed on the arguments of the geologist from the University of California in San Jose the Floors of Messina. Creating a digital map of the traces with the help of GPS, she found that most of them are not really parallel.

The search for the causes of the movement of stones still in motion, when connected to the case specialist from the Johns Hopkins University Ralph Lorenz. Having studied the movements of stones in other parts of the world, Laurence learned about the huge boulders that stand on the Arctic tidal beaches due to the lifting force of the ice. To check the connection between this phenomenon and the fact that from year to year occurs on the dry lakebed, he conducted an experiment right in your kitchen. He picked up a small stone, put it in a plastic container that was filled with water and a couple of inches, so that it protruded a small portion of the stone, and put it in the freezer then, turning the piece of ice so that it is sticking out of the stone looking down, he spread them across the tray of water at the bottom of which lay the sand. As expected, from the slightest breath frozen in the ice the stone slid, leaving footprints in the sand.

In 2011, the new model described in the scientific report. In fact, around the stone formed a piece of ice, and the liquid level changes causing the stone comes up from the mud, ” explained Laurence. Is a small piece of floating ice, the keel of which is looking down, which gives him the opportunity to carve a furrow in the soft dirt. Calculations show that in this scenario, the ice has almost no friction and the stones can slip even with the lightest breeze.

However, among the visitors to the Racetrack Playa, there are those who oppose such a prosaic explanation – people like mystery, they like questions without answers.