New ultra-white paint cools the building like an air conditioner 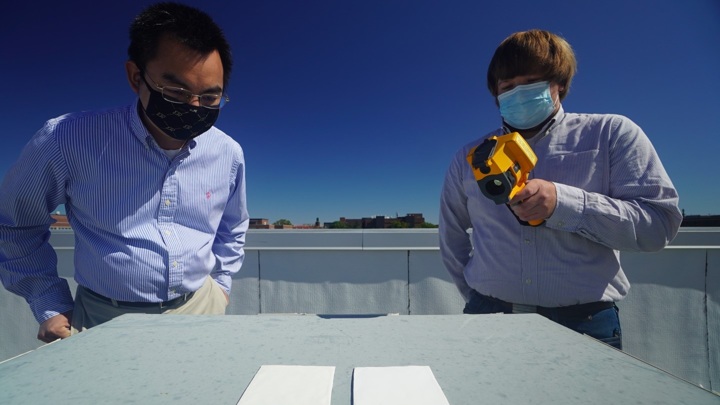 Scientists have created a paint that literally replaces an air conditioner. Even in direct sunlight, it remains colder than the surrounding air.

The achievement is described in a scientific article published in the journal Cell Reports Physical Science.

Believe it or not, it may be hard for Russians to believe, but most people need building cooling more than heating. This is true for most people in the United States, not to mention Africa, South and Southeast Asia, and many countries in Latin America.

Meanwhile, not all residents of hot countries can afford air conditioning. In addition, these devices, by cooling the air in the room, heat it outside. As a result, the city streets are only getting hotter.

Finally, air conditioners use up electricity. For example, in the United States, about 10% of all electricity is used to cool buildings. That is, in 2019, 400 terawatt-hours were spent on the operation of air conditioners there. It is clear that energy costs money. And the ecological situation from the development of several hundred additional terawatt-hours (and this is only in one country) has hardly improved.

Scientists are now proposing a much more economical solution for cooling buildings overheated by the generous southern sun. And this is … white paint. True, very unusual. It sends the energy received from the sun back into space, and does it in three ways at once.

First, this paint reflects 95.5% of the incident sunlight (while ordinary white paint only 80-90%). Secondly, it also reflects most of the ultraviolet rays. By reflecting direct sunlight (both visible and ultraviolet rays), the paint does not heat up underneath.

But she also has a third feature. The new material actively emits infrared waves. On a sunny day, it can emit over 37 watts per square meter. And the paint radiates these waves just in the narrow range in which the earth’s atmosphere is transparent for them. Thus, the painted surface “launches into space” and the heat that it receives from contact with the surrounding air.

Tests have shown that even at noon in direct sunlight, it is 1.7 ° C colder than the air. At night, the difference is even greater: as much as 10 ° C.

“It is very strange that the surface temperature in direct sunlight is lower than the temperature [air] reported by the local weather station for the region. But we have shown that this is possible,” said research team leader Xiulin Ruan of the University. Purdue. 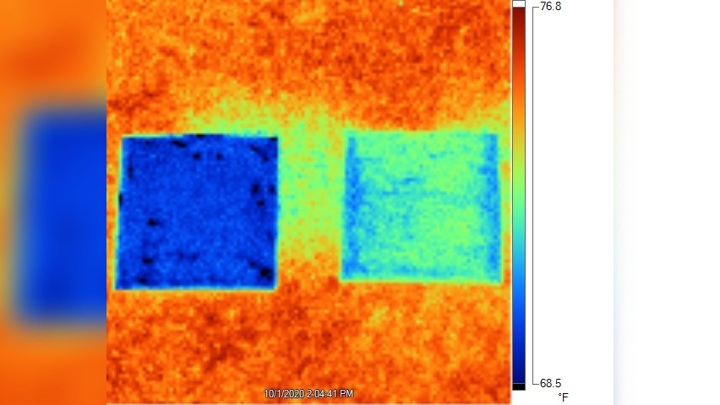 Infrared image of a surface painted with new paint (left) and commercial white paint (right). It can be seen that the temperature of the left sample is much lower.

Note that attempts to develop a paint with such properties have been made since the 1970s, but only now have been crowned with success. Scientists had to work hard to get such an impressive result. They went through hundreds of composition options before finding the best one.

It is all the more surprising that the dye is the most common calcium carbonate (CaCO3) – the basis of limestone and the most important component of writing chalk. New paint consists of 60% of this cheap compound. It is otherwise conventional acrylic paint and can be produced in existing industrial plants.

The secret of the new material is not only in the optical properties of calcium carbonate. The paint was specially made so that it contains CaCO3 particles of various sizes. This gives it special optical properties.

Now the authors plan to test the durability of their paint, its resistance to moisture and other characteristics important for a commercial product.