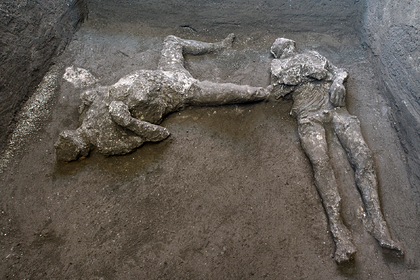 Archaeologists have unearthed the remains of a wealthy Pompeian and his slave who perished in the catastrophic eruption of Vesuvius in 79 AD. This was announced in a press release published on the Phys.org website.

New fragments of bones and skulls were found during excavations of the ruins of a villa with panoramic views of the Mediterranean Sea, located on the outskirts of a Roman city. According to the researchers, the victims of the eruption initially survived when Vesuvius began to spew ash, but died in a powerful explosion that occurred the next morning. People were buried under a thick layer of ash at a depth of two meters.

Scientists poured a liquid solution of chalk into the cracks and voids left by decomposed bodies in ash and pumice. This allows you to capture the shape and position of the bodies of people at the time of their death.

An analysis of the bones of the skull and teeth showed that one of the victims was 18-25 years old. His vertebral discs were deformed due to heavy manual labor. The other was a man of strong build, 30-40 years old. The remains of the victims were found in a room located on the side of an underground corridor called the cryptoporticum. The deceased probably believed that they were safe under the villa, but the incandescent gases and ash of the pyroclastic flow that arose on the morning of October 25, 79 AD entered the cryptoporticum through the windows, killing everyone who was there.