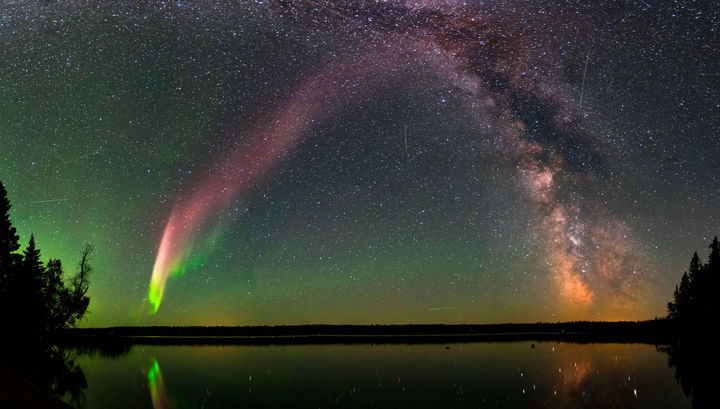 An unusual phenomenon was noticed in 2015 by the participant of the project “Aurorazavr”. This project, led by Elizabeth MacDonald of NASA, collects real-time data about the aurora, including amateur photographs. The site notifies users where right now you can enjoy in a literal sense an unearthly beauty. Participants of the “Aurorazavr” are volunteers, often without special education, that is, the project belongs to the civil science.

During the year, users reported thirty cases of remarkable glow. A new phenomenon needed to be called something, and users gave him the man’s name “Steve” (Steve). An inexperienced witness would take him for a polar light. But those who see not the first or even the tenth “heavenly fire” in life, the differences are evident.

Professionals interested in the phenomenon connected to the study “heavy artillery”. Special cameras of the “all sky” class captured a mysterious radiance. The satellites of Swarm recorded the state of the Earth’s magnetosphere at the time of cosmic illumination.

“This is a light show that we can observe thousands of kilometers from the Earth,” explains McDonald, “It corresponds to something that is happening in space.” Gathering more data about Steve will help us better understand his behavior and his influence on space weather “.

It turned out that “Steve” and the classic aurora are, so to speak, two boots of steam. Both phenomena are caused by coronal mass ejections coming from the Sun. These clouds of plasma disturb the Earth’s magnetic field (this is the famous magnetic storm). Having penetrated the “magnetic shield”, the particles penetrate unusually deep into the atmosphere. Faced with atoms of air, they transmit energy to them and make them shine.

The devil, as usual, is covered in detail. Two phenomena differ by which lines of the magnetic field “break through” the charged particles. Therefore, “Steve” is also observed in the middle latitudes, where classical auroras are rarely visited. For him, not just a novelty, not only the breadth of Moscow, but also the breadth of Krasnodar.

Surprise was the fact that when photographers on Earth admire “Steve”, in the magnetosphere there is a so-called subaural drift of ions (the flow of energetic charged particles). Thanks to satellite measurements, this phenomenon has been known since the 1970s, but so far no one has imagined that it is accompanied by a glow that can be seen from the Earth with the unaided eye.

It is also interesting that “Steve” appears during the classical auroras, only at lower latitudes. Perhaps this phenomenon will become the key to understanding phenomena in the so-called subauroral zone. This is the region of the magnetosphere bordering the zone of classical auroras (auroral zone) from the low latitude side. The processes that take place there during magnetic storms and associated aurorae are not yet sufficiently studied.

Understanding the phenomenon, scientists decided to leave him a cheerful man’s name and called him a strong increase in the rate of thermal emission, in English, a strong thermal emission velocity enhancement, which gives the acronym STEVE.