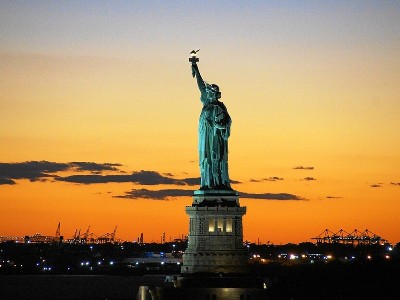 Because of the rise in the level of the world’s ocean caused by global warming, the United States could lose by the end of the century more than 13,000 objects of historical heritage only on the East coast of the country. With such a forecast, as the newspaper The Hill notes on Monday, a group of American scientists led by an archaeologist from the University of Tennessee David Anderson spoke.

In their study, they relied on the assessments of the UN Intergovernmental Panel on Climate Change, according to which the increase in the water level in the ocean by the year 2100 will be approximately 1 meter, and over the next several centuries – 5 meters.

“With an increase in the ocean level only about 1 m under water will be about 13 thousand places of archaeological excavations, archaeological and historical sites on the East Coast of the United States,” the report of the group says. “We will lose many of the evidence of human development of coastal areas in America, which occurred for several millennia,” Anderson said. “Scientists will also never make new archaeological discoveries in the coastal zone,” he added.

If the level of the ocean rises 3 m or more, then under the water may be such first settlements of Europeans on American soil as Jamestown and St. Augustine, the researchers said, as well as the entire cosmodrome at Cape Canaveral in Florida.

Jamestown was founded by the British in May 1607 on the territory of the present state of Virginia on the site where 105 people recruited by a private Virginian London company landed on the banks of the James River. The settlement lasted until 1699. Now there is an open-air museum.

St. Augustine is the oldest existing city in the United States. In 1513, the Spanish conquistador Juan Ponce de Leon landed there, and he named the land that he had discovered as Florida.

Previously, the US National Oceanic and Atmospheric Administration reported that the rate of ocean level rise on the East Coast of the United States is considered to be among the highest in the world. According to the estimates of the US space agency – NASA, the melting of the Antarctic ice sheet, which contains about 61% of freshwater reserves on Earth, could lead in the coming centuries to an increase in the ocean level by 4.5 m.

Meanwhile, emphasizes The Hill, the current US President Donald Trump and key members of his cabinet openly express skepticism about the conclusions of scientists that the warming of the climate is caused by human activities.