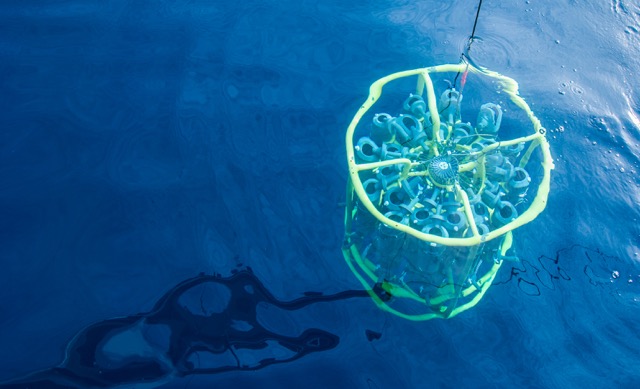 The study, conducted by Dr. Ben Temperton from Exeter University and an international team of scientists has shown that bacteria of the genus Pelagibacterales, which are among the most common organisms on Earth (up to half a million microbial cells in every teaspoon of sea water), have a great influence on the stabilization of the earth’s atmosphere.

Scientists discovered that Pelagibacterales can be a potential source of production of dimethyl sulfide (DMS), which is known to stimulate the formation of clouds over the ocean. Climate scientists believe that this gas is one of the most important sulfur-containing gases in our atmosphere — in the air it is oxidized and forms particles, composed mainly of sulfuric acid. Particles affect the acidity of the atmosphere, promoting cloud formation.

Also with these bacteria is linked to the theory about negative feedback — the CLAW hypothesis. According to this hypothesis, the temperature of the Earth’s atmosphere stabiliziruemost with negative feedback, when the solar light affects the growth of phytoplankton, which, in turn, emits a connecting dimethylsulfoniopropionate (DMSP). This compound does not enter air under certain conditions, in bacteria, it is chemically converted to dimethyl sulfide. During some chemical processes, the dimethyl sulfide leads to the formation of clouds, which leads to the fact that less sunlight reaches the ocean surface.

These latest data show the importance Pelagibacterales in this process and open the way for further research. According to Dr. Temperton, this study demonstrates the important role of bacteria Pelagibacterales in maintaining the stability of the climate. If in the future a model of the influence of dimethyl sulphide on the climate will change, it will be necessary to consider these bacteria as the main participant in the process. The study also revealed new information about the way Pelagibacterales produce dimethyl sulfide, Temperton described it as “simple and elegant”. These organisms do not have genetically regulated mechanisms found in most bacteria. They have some of the smallest genomes of all living organisms, because small genomes require fewer resources for reproduction.

The mechanism of dimethyl sulfide production by these bacteria is similar to the mechanism of the pressure relief valve. When DMSP for these bacteria is too much in the course of metabolic process as waste is generated dimethyl sulfide. This “valve” is always on, but he begins to operate when the concentration of DMSP exceeds a certain threshold. Kinetic regulation is not uncommon in bacteria, however, scientists first observed its participation in this important biogeochemical process.

Doctor Jonathan Todd from the School of biological Sciences, University of East Anglia noted that these types of oceanic bacteria are the most rasprostranennymi organisms on Earth, their population reaches 1.5 million microbial cells in every teaspoon of sea water. Scientists have studied them at the molecular-genetic level to find out how they generate the gas dimethyl sulfide. Research eventually showed, as dimethylsulfoniopropionate, which is produced in large quantities by marine plankton, is converted to dimethyl sulfide of tiny marine organisms Pelagibacterales.

According to Dr. Emily Fowler from the School of biological Sciences, University of East Anglia, Pelagibacterales produce dimethyl sulfide with the help of a previously unknown enzyme — the researchers found that the same enzyme is present in other common marine species of bacteria. Most likely, this means that scientists previously underestimated the contribution of microbes in the production of such an important gas.