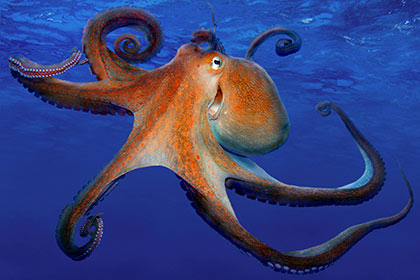 Simultaneously with the destruction of coral reefs and extinction of fish the oceans of the planet filled the cephalopods — the number of octopuses, squid and cuttlefish has been steadily growing since the 1960-ies, and scientists still can’t explain the cause of this phenomenon.

Biologists know that the populations of cephalopods have tended to move very sharply: behind the surge follows the rapid decline to minimum values. It is one such a case (a sudden drop in populations of giant Australian cuttlefish) and inspired Dalda, Zoe (Zoë Doubleday) from Adelaide University to study the situation in other seas and oceans.

Few years, the biologists collected information, begging their colleagues from different countries of the world data on the catch of various shellfish local fishermen. In addition, Dalda have compiled data on 32 scientific researches performed in the last 60 years. In the end it turned out that the population 35 of the main types of cephalopods, with small fluctuations in the number, growing steadily since 1950-ies (reborn, by the way, and the giant Australian cuttlefish).

Scientists say that octopuses and squid, unlike fish and corals adapt quickly to changes in the physical environment of the sea, and use the weakening of competitors to capture new ecological niches. In particular, the global fishery removes from the oceans major competitors cephalopods — predatory fish.

However, expect the same rapid growth in the future should not, implies, Dalda. Shellfish are already suffering from zakalivanie ocean, and from the growth of its popularity in cooking. Finally, the abundance of individuals and the shortage of food cephalopods will begin to eat each other (these animals are peculiar to cannibalism).