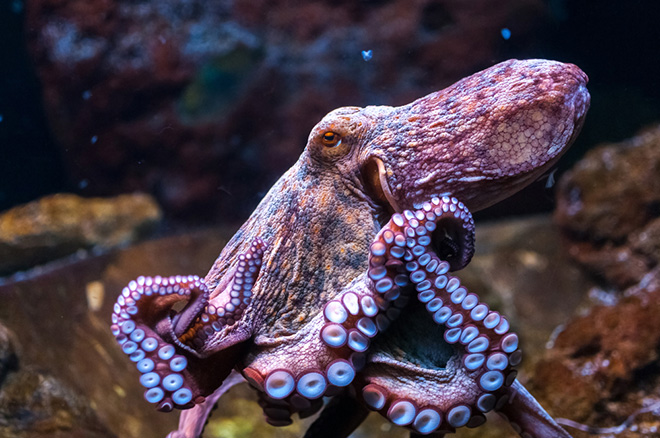 When the octopus The inkwell ran away from the aquarium in the National Oceanarium of New Zealand in April 2016, he had to squeeze through a sewer pipe 15 cm wide. But he nevertheless escaped to the Pacific Ocean! Together with an octopus, he took the hearts of his fans, who glorified the animal, the outwits of the oceanarium, in social networks.

The intellect of octopuses is capable of more than escape from the aquarium. They can open glass decanters and solve other complex mechanical problems. They are playing. Some are capable of mimicry distorting the body. All this suggests that cephalopods – invertebrates, many-legged creatures, including octopuses and cuttlefish – stand out among clan-like relatives.

Cephalopods are unusual not only because they solve riddles. Squids, cuttlefish and octopuses do not follow the usual rules of genetics, a new study says. Their RNA is intensely rewritten, especially the encoding of proteins that are found in animal neurons.

And this is very strange. According to the central dogma of molecular biology, cells transform DNA sequences into RNA, which then create proteins.

In octopuses, transcription of RNA predominates, the type of change in which a single octopus gene can produce many different types of proteins from one DNA.

Changes in RNA have a significant effect on the biology of squid or octopus. Previously, scientists found that octopods living in Antarctica used a change in RNA to keep the nerves excited in cold waters.

In a new report, scientists measured the rate of transcription of RNA in some species of cephalopods. They found that squid, cuttlefish and octopus – the most intelligent types of headaches – often changed RNA, almost in one of the two rewritten genes. Moreover, the editing of RNA was often aimed at genes related to the functions of the nervous system.

But there is one exception. The type of cephalopods called nautilus did not demonstrate high rates of RNA transcription. But the nautilus do not shine with intelligence. Perhaps the transcription of RNA is associated with the mental abilities of animals?

Large-scale editing of RNA is expensive. If a mutation occurs at a mutable location, the cells can no longer change it. It turns out that squids and octopuses have lower rates of DNA mutation than other organisms. In other words, while other animals adapt and evolve through changes in DNA, cephalopods place RNA transcoding in the first place.