Off the coast of the Greek island found strange objects 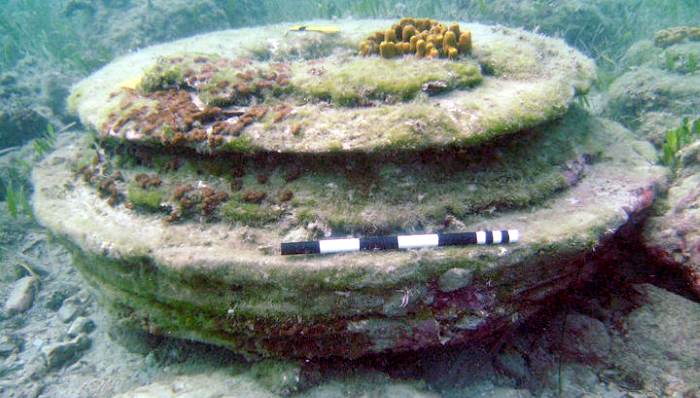 Divers discovered off the coast of the Greek island of strange objects that resemble the columns of ancient buildings. Initially the scientists decided that it was the work of a vanished human civilization. But as it turned out, the ancient underwater ruins were created by nature itself, although in a rather unusual way. That is the conclusion of a joint study, scientists from the universities of East Anglia and Athens.

The bizarre discovery was initially made by the tourists-divers, sinking near the town of Alykanas. They found what looked like a cobbled tiers with courtyards and colonnades. People decided that accidentally found the ruins of a long forgotten civilization that disappeared when waves engulfed the coast of the Greek island of Zante (Zakynthos).

But a new study has shown that this place was created during the natural processes that changed the surface of the seabed during the Pliocene epoch.

Lead author of the new study Professor Julian Andrews (Julian Andrews) said: “the site was discovered by divers, and our first thought was that this is an ancient port city, lost in the sea. Since outwardly, the place looked like a circular column base and mosaic floor. However, for some mysterious reasons we have not found any signs of life, for example, of pottery”.

“We looked at a place that is between two and five meters under water, and found that it has a geological origin,” says Andrews.

“We found that these monicaobrien objects are probably the result of a subsurface fault, which is not fully broke the surface of the seabed. The defect allowed the gases, especially methane, to escape from the depths”, — adds the scientist.

It turned out that “the remains of the city” has created sulfate-reducing bacteria at the site of incomplete fracture began to flourish because of the methane seeping through the sea bottom. Their activity in turn changed the chemical composition of the seabed, created favorable conditions for the formation of manganese-rich mineral called dolomite.

Such mineral deposits and formed a strange underwater “structures” that reminded the divers of the ancient buildings, experts say.

According to archaeologists, there are such constructions for about three million years ago, and the process of their creation took probably hundreds of thousands of years. It is very fast for geological processes, but, of course, much longer than the time that a person spends on the construction of their cities.

We add that such discoveries rarely are made in shallow water. The most similar discoveries were made at depths of hundreds or even thousands of meters.

“This object is the evidence of natural methane seeps from under the rock from hydrocarbon deposits”, — concludes Andrews.