Omar with a “tattoo” from a Pepsi can 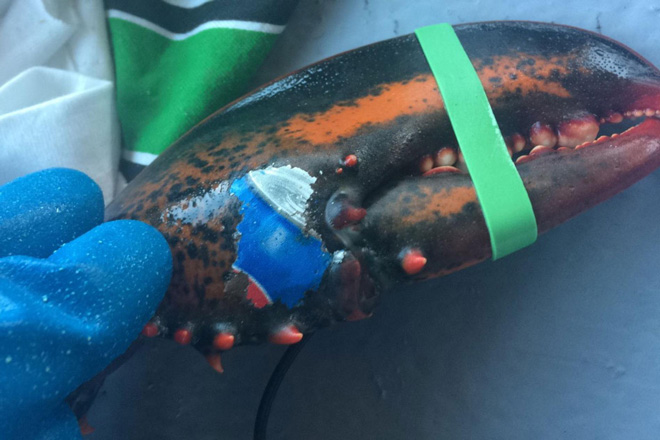 We again received a reminder that the ocean is full of garbage. On a lobster clove, which was caught along the coast of the Canadian province of New Brunswick, noticed an unusual mark – a print of the Pepsi bank. On the crustacean, only a part of the can of the famous beverage is “tattooed,” but, nevertheless, the brand is quite recognizable. It is not clear what the lobster came up with – a real Pepsi bank or its image on a box or some other item.

The news about the “tattoo” of a lobster was spread by the Canadian Broadcasting Corporation. Very soon the images began to circulate on the Internet as a symbolic reminder that our oceans are infected with garbage produced by man.

Omar was caught by Carissa Lindstrand, who immediately recognized the brand, as she drinks 12 cans of a drink a day. For four years, that she is engaged in fishing, Carissa never saw a print of garbage on an animal.

Ocean garbage is an important problem in New Brunswick, because it penetrates even deep beneath the surface of the water. And the problem is urgent not only in this Canadian province. Apparently, the entire globe suffers from pollution by anthropogenic debris.

In September, a picture of a seahorse that sailed off the coast of Borneo, holding its wand with a tail, became a signal about the catastrophic pollution of the ocean. In 2015, there were 5.25 trillion pieces of plastic. And last summer in the Pacific Ocean found a garbage spot the size of Mexico.