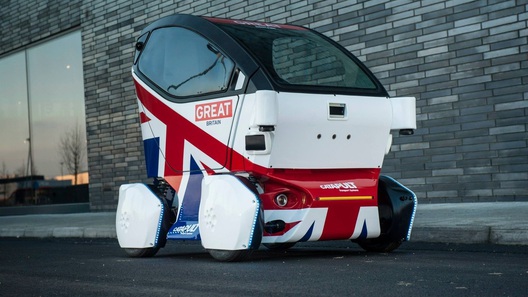 Compact electric cars avtopilotiruemy LUTZ Pathfinder, developed by British company RDM Group together with Oxfordci University, began to travel on streets of the British town of Milton Keynes in the UK is gradually preparing to make Autonomous transportation a regular part of street traffic.

While that specific unmanned capsule, designed for two passengers romp through the pedestrian areas in Milton Keynes at ultra-low speeds. To rush things and release the drones on public roads the British are not in a hurry: by the end of next year the number of such capsules transport in the city will reach forty pieces.

For orientation in space, this extraordinary vehicle uses radar and camera system. The usual steering wheel is also present, if something still goes wrong. For security purposes, the capsule moves at super slow speeds to disperse it faster than eight miles an hour impossible.

The UK authorities have approached the introduction of Autonomous vehicle very seriously: last year it announced the launch of several pilot programmes in which it is planned to test different options Autonomous passenger transportation: so far, however, all these projects imply the presence of the driver at the wheel just in case.

The first in a series of tests was the Shuttle bus that travels independently in Greenwich for a special little route, but the experiment at Milton Keynes was the first of those held in conditions of the big congestion of people.