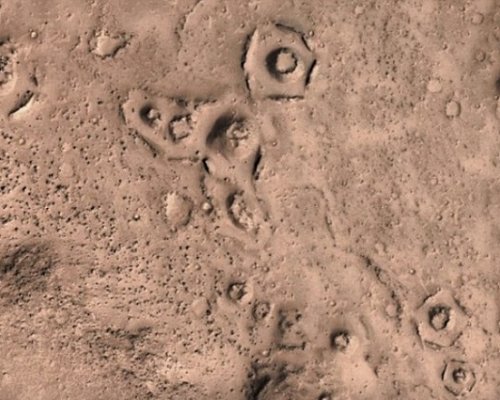 Ufologists declared that on Mars there was an ancient civilization earlier. They noted in the new pictures transferred from the Red planet, residuals of “fortified cities”.

Pictures were made the offices of NASA researching the surface of the Red planet. Supporters of conspiracy theories declared that it is irrefutable proofs of existence of residuals of ancient culture, and “fortified cities” were significantly destroyed because from the moment of creation there passed the huge number of time. All who are among abnormal finds hunters made mounting of separate parts of pictures of a relief and published a video on the Internet.

Actually, it is a series of the pictures made the office of NASA during passing over plains near the Martian equator. A part of heights on a photo look as the dim calottes surrounded by almost round rings. Corresponding structures were noted by Elizy. In social networks reacted to video differently. Some users decided to refuse explanations about the frozen surface of the Red planet which provoked similar change of a relief and solid adhere to the version about ancient “fortified cities” on Mars. At the same time the most enthusiastic declared that on Mars the underground civilization can meet.