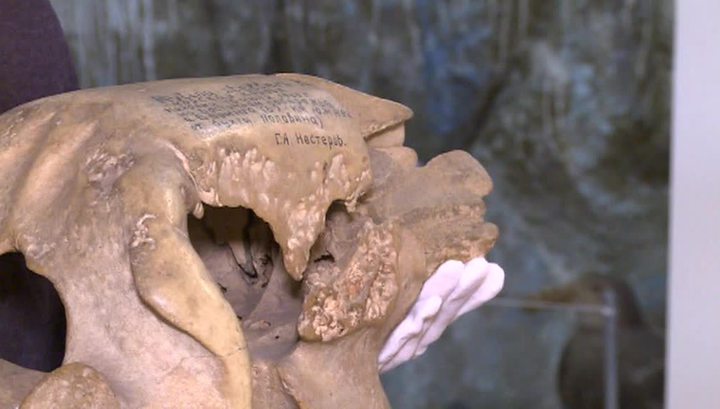 Another surprise with the Commander. During a survey of the coastline of the Bering Island, a conservation scientist discovered a skeleton of a marine animal, the species of which disappeared 250 years ago. A unique find is now dreamed of getting to many museums around the world, because this is the first skeleton of a steller cow, which has been preserved almost entirely.

Given the harsh climate of the Commander Islands, it was not immediately possible to remove the skeleton from the layer of pebbles and sand. A few days, like a fence, the ribs of a steller’s cow protruded from the shore cliff, waiting for the expedition members. As soon as the storm subsided, the scientists set to work. Fearing to damage the most valuable find, eight people dug out the skeleton within four hours. It turned out to be a large specimen, its length reached six meters, and the weight was about five tons.

“Bones were cleaned of sand and pebbles, dried and marked, we began to pack them, put them in bags and carefully put them into the bodies of ATVs .To ensure that the bones are not rubbed and strayed in some way.” They were taken to the reserve and now it is kept in the reserve collection of our reserve, is waiting for the moment when the construction and equipment of the visit center of the reserve will be completed and we will already gather this skeleton together to show it to everyone, “said Evgeny Mamaev, deputy director for science of the State Natural reserve “Commander”.

Today, in different museums of the world, the skeletons of the sea Steller’s cow are quite numerous, they are presented in the form of fragments, or specimens, collected from the bones of several animals. But the whole, almost complete skeleton is a single piece. Such findings were made in the middle of the 19th century, and the last time a full skeleton of a sea cow, only three meters long, was discovered in 1987.

“Of course, any museum in the world would gladly like to have a full skeleton of a sea cow in its funds or in an exposition,” says Natalia Konysheva, a senior research fellow at the Kamchatka Regional United Museum.

A sea cow or cabbage was discovered in 1741 on the then-unknown and uninhabited island of Bering. Already at that time this species was on the verge of extinction and, for some thirty years, was completely destroyed by man.

“The animal was not afraid of absolutely people, could swim close to the shore, swam to the boats that sailed alongside it.On its misfortune, this animal had a very large herd feeling.When people began to hunt this animal, having tasted very useful and tasty meat, at the extraction of one specimen, all the rest rushed to the aid and therefore killed not one, but several animals at once, “explains Natalia Konysheva, senior research fellow at the Kamchatka Regional United Museum.

In the museum of the future tourist visit center on the Commander, the unique skeleton of the steller cow will become one of the main exhibits, as the first victim of the nature use of these amazing islands.