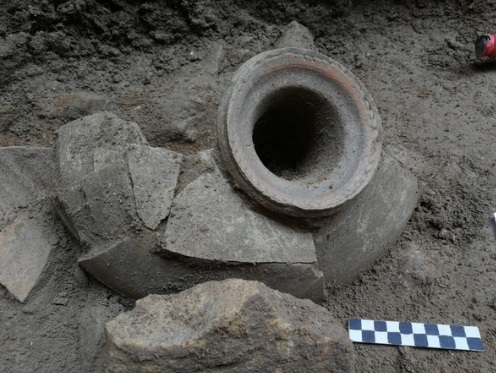 Archaeologists during excavations on the island of Sicily discovered a burial of the 7th century BC. In Corinthian hydria, they found the remains of a baby.

The find was made in the historical center of the ancient city of Gela, which is located in the southwest of Sicily. Workers came across a necropolis, laying fiber optic cable on one of the main streets.

Archeologists who arrived at the site excavated and immediately found two unusual burials and many artifacts. The necropolis dates from the 7th century BC. In one of the burials, the remains of a newborn were discovered. The baby was buried in hydria – an ancient Greek jug for water.

In another burial were the remains of a large animal, probably sacrificed during a funeral rite. Near the bones, an even older elongated jug for storing wine was discovered. It dates from 700-650 years BC.
In addition to jugs, dozens of ceramic items from different eras were discovered in the necropolis. For example, about 20 ceramic products were identified as products from Fikelloura – they were made on the island of Rhodes between 560 and 495 BC. This suggests that the necropolis has been actively used for a significant period of time.

It is believed that Jela was founded by Greek colonists from Rhodes and Crete in 688 BC. This colony was destroyed by the Carthaginians in 405 BC. The conquerors first destroyed all the temples, and then burned the city. The surviving colonists were resettled in Syracuse.

It was because of the sack of the city by the Carthaginians that there were almost no archaeological traces of the first settlement. Therefore, the researchers argued about dating. The found necropolis confirms the hypothesis that a settlement on the site of Jela could exist even before the appearance of the Greek colony.