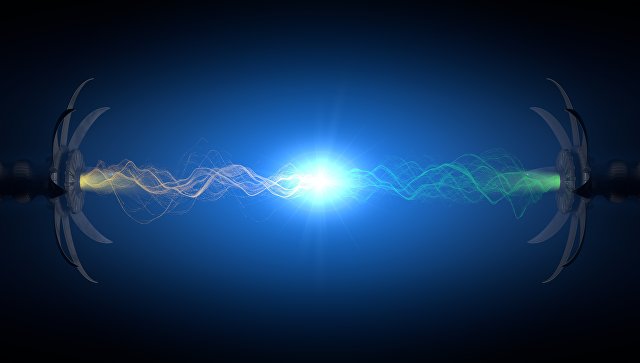 Physicists at CERN state that they managed to accidentally create a quark-gluon plasma, the matter of the times of the Big Bang, at the Large Hadron Collider (LHC). The results of these experiments were published in the journal Nature Physics.

“We are very pleased with this discovery, we have a new opportunity to study matter in its primary state.The ability to study quark-gluon plasma in simpler and more convenient conditions, such as collisions of protons, opens up for us a whole new dimension of how we can study that , How the universe behaved during and before the Big Bang, “said Federico Antinori (Federcio Antinori), the official representative of the ALICE collaboration within the LHC.

The so-called quark-gluon plasma, or “quagma”, is a matter “disassembled” into the smallest particles-quarks and gluons, usually held inside protons, neutrons, and other particles by strong nuclear interactions. To “liberate” quarks and gluons, giant temperatures and energies are required, which, as scientists believe today, existed in nature only at the time of the Big Bang.

About ten years ago, physicists discovered that such conditions can be created if one encounters sufficiently heavy ions with each other with the help of powerful particle accelerators. For a long time, scientists thought that it was impossible to get another “quagmus” in any other way, but last year they saw the first signs that this was not the case when they studied the results of the latest experiments on the CMS detector in the LHC. It turned out that the “primary matter of the universe” is formed in collisions of single protons and lead ions.

Antinori and his colleagues discovered that an analog of the quagmus also arises when protons collide with one another, studying the data collected by the ALICE detector after the restart of the LHC in April 2015 and to the present day.

Protons and neutrons consist of two types of subatomic particles – “lower” (d) and “upper” (u) quarks. There are four more types of quarks – adorable (b), enchanted (c), strange (s) and true (t). They form the basis of exotic forms of matter and do not exist in nature in a stable form. All these quarks, as the scientists say, can be formed only in the presence of “free” gluons, inside the quark-gluon plasma.

As shown by observations at ALICE, collision of protons with each other often led to the appearance of microscopic “clouds” from quark-gluon plasma – “soup” from quarks and gluons from destroyed protons, heated to unimaginably high temperatures – about four trillion degrees Celsius. Her tracks in the form of particles containing so-called “strange” quarks, were detected by the detector in large quantities.

Interestingly, particles with a large number of “strange” quarks appeared more often than other products of collisions of protons. According to scientists, this indicates the unusual circumstances of their birth, associated with those conditions that reigned inside the quark-gluon plasma at the time of its formation.

This, in their opinion, suggests that the properties of the “quagmus” can be studied using collisions of “convenient” protons for physicists, rather than complex heavy ions, which will bring us closer to understanding how the Universe looked before and during the Big Bang.