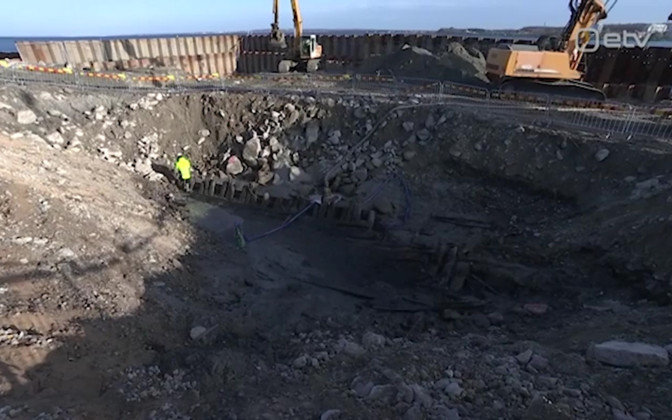 In Estonia, workers, while carrying out road construction works, stumbled upon a wooden ship buried underground, aboard which unexpectedly found objects of the 20th century.

According to ERR News, a wooden vessel was discovered not far from Tallinn Harbor, which is located on the Baltic Sea. Archeologists were invited to the place. They concluded that this ship probably sank at the end of the 15th century.

The age was established by the traces of the use of primitive firearms found during the inspection of the vessel. It surprised scientists that on board the ship were objects of the 20th century. So, a modern metal cable was attached to his nose.

In addition, archaeologists discovered an untouched can of canned food with an expiration date, judging by the preserved marking, in 1972. However, Estonian scientists have a reasonable explanation.

They believe that the ship spent many centuries at the bottom. However, in Soviet times, he was picked up from there and moved to another place, since it probably interfered with shipping or some kind of construction work. It was then, during transportation, that the workers forgot the cable and canned food on board.

To test this hypothesis, researchers intend to find and interview eyewitnesses of those events, for example, people who worked in the local port in the 1960s. Perhaps one of them will recall how the mysterious ship was moved.

In addition, scientists will create a three-dimensional model of the vessel and take wood samples from it. Their study will clarify the age and origin of the ship.