One Hundred Thousand Years: Traces of the Most Ancient Astronomy Found

Experts have discovered traces of the oldest legend about the starry sky. Perhaps it originated even before the release of Homo sapiens from Africa and its dispersal throughout the Earth. Australian astronomers Ray Norris and Barnaby Norris came to this startling conclusion.

Scientists have drawn attention to the strangeness inherent in many myths about the Pleiades star cluster. There are several thousand stars in this group, but only six luminaries are visible to the naked eye. However, from antiquity, another name for the cluster has come down to us – Seven Sisters. Why seven and not six?

The ancient Greeks said that the Pleiades are the seven daughters of the titan Atlas. To save them from the lustful hunter Orion, Zeus turned the girls into stars and placed them in the sky. But one of them fell in love with a mortal youth and left heaven for him. Therefore, we see in the Pleiades not seven, but only six luminaries.

Different tribes of Australian aborigines also called the Pleiades a company of girls, and the nearby constellation Orion – a man or a whole group of men burning with passion for them (Vesti.Ru told in detail about one of these legends). Many peoples of Europe, Africa, Asia, Indonesia and America have similar legends. And each of them says that there were seven Pleiade girls, but then one of them ran away, or died, or somehow disappeared.

The similarities are striking. How could the peoples, tens of thousands of years ago, dispersed to different ends of the world, independently come to the same plot? And why are all these stories talking about seven girls, and a special explanation is required for the fact that in the Pleiades we see only six stars? 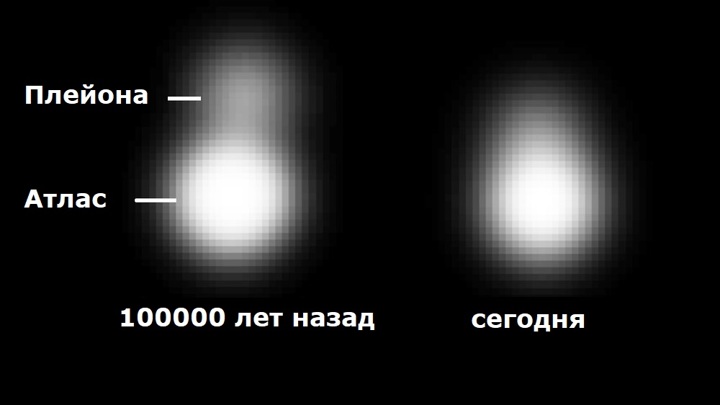 The apparent positions of the stars of Pleion and Atlas one hundred thousand years ago and today.
Illustration by Ray Norris.

In search of an answer, scientists reconstructed the appearance of this star cluster a hundred thousand years ago. And they found something very interesting.

Today the stars of Playon and Atlas are located in the sky so close to each other that for the naked eye they merge into one star. The same was the case several thousand years ago. But a hundred thousand years ago and earlier it was still possible to discern that these were separate luminaries. Then people counted in the Pleiades not six, but seven stars.

Maybe the legend of the seven sisters originated at least a hundred thousand years ago? That would explain why there are seven and not six. Moreover, in those days, the species Homo sapiens had just begun to conquer the planet. The oldest remains of “sapiens” outside Africa are 177-194 thousand years old, but large-scale colonization began much later. Our species reached Australia 60 thousand years ago, widely spread across Europe about 40 thousand years ago, and America was settled even later. If the legend of the Pleiades is one hundred thousand years old or more, it is not surprising that the people inhabiting the globe carried it with them. And when there were six stars in the cluster, the storytellers had to come up with an explanation, and stories of deaths and escapes appeared.

The Norrises set out their arguments in more detail in an article that was included in the book Advancing Cultural Astronomy (“Development of astronomy in culture”). A preprint of this article is available as a PDF file.