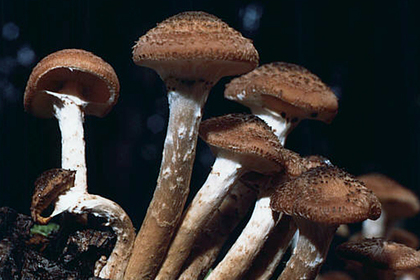 An international group of scientists found out that honey agarics possess specific DNA, which makes them “serial killers” of trees. These genes contribute to the fact that mushrooms can grow to gigantic proportions. So, the largest organism on Earth is the dark opaque (Armillaria ostoyae). This mushroom grows in the forest reserve Malur of the American state of Oregon.

Mycelium (mycelium) is an underground part of the fungus and looks like a network of thin branched filaments. It is known that the mycelium Armillaria ostoyae in Oregon does not form separate clusters, but form a single organism with a mass of 600 tons and covers an area of ​​8.4 square kilometers. According to scientists, the age of this largest living creature on the planet is more than two thousand years.

Another large organism is the thick-legged apiary (Armillaria gallica), growing in Michigan. It covers an area of ​​0.37 square kilometers.
To understand what makes Armillaria such unique and successful species, biologists have analyzed the genome of various fishes, having ascertained their origin and evolutionary development. They compared the DNA of such species as A. ostoyae, A. cepistipes, A. gallica and A. solidipes, with the genes of other fungi. It turned out that a significant increase in the genome is typical for the spleen, which led to the appearance of specific genes associated with the pathogenicity of fungi, as well as contributing to the formation of rhizomorphs.

Risomorphs are plexus of fungal filaments that penetrate into trees and transport water and nutrients from them to the fruiting bodies. They also spread from diseased plants, contributing to the infection of healthy ones. This parasitism leads to mass death of trees.