Over Kazakhstan, a perfect cloud ring has flown by 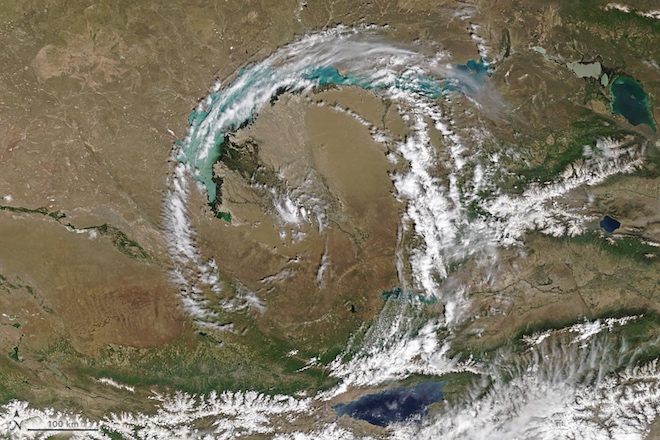 A lot of attention is paid to the study of clouds, but sometimes amazing environments are noticed in the atmosphere, which are attractive both for aesthetic reasons and for scientific reasons.

Last week, May 22, the MODIS spectroradiometer on NASA’s Terra satellite received a circular cloud vortex flying over Lake Balkhash in eastern Kazakhstan. The picture shows that the clouds formed an almost ideal circle.

The MODIS tools installed on polar orbiting satellites receive images of each part of the Earth once a day. The INSAT-3DR geostationary satellite, operated by the Indian Space Research Organization, is closely watching this part of the planet and receives new images every 26 minutes. This helps fill in the data gaps.

The Terra satellite received the image at 12:05 local time. The INSAT-3DR images show that a few hours before the circular formation was connected with the convection region over the western mountains of the Tien Shan.

The clouds began to spin because of the cyclonic wind. The radius of the circle was about 200 kilometers – small enough that meteorologists could attribute the phenomenon to the category of mesoscale. Synoptic scales have a horizontal extent of more than 1,000 kilometers, while microscale ones are less than 1 kilometer.