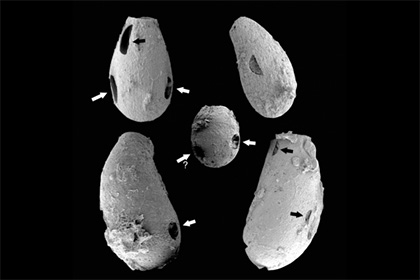 Group the paleobiologii under the leadership of Suzanne porter (Susannah Porter) from University of California, Santa Barbara have found evidence of the existence of amoebas vampire about 500 million years ago. Scientists revealed tiny marks on the fossils that are left single-celled predators, feeding on their victims. A study published in the journal Proceedings of the Royal Society B.

With a scanning the electron microscope, scientists have discovered a circular hole, which were left by the pseudopodia of the amoeba, which is a long the outgrowths. Using these single-celled organisms leaky membrane cells of their prey, came inside and ate their contents. At to the researchers, the discovery is the earliest evidence of predation in eukaryotes.

The fossils were recovered from the area a Large Canyon, the layers of ancient rocks, known as the group Choir and folded shales. The age of the finds was 742-782 million years, and they belonged to organisms which lived in an ancient sea. About 10 percent of the remains of seven species of extinct creatures had holes with a diameter up to one micrometer. I wonder what the holes are the difference in size. Scientists attribute this to the fact that different types amoebas vampires had growths of various sizes that reflect their eating habits. Analogue are modern amoeba family Vampyrellidae, which include a variety of unicellular organisms.

Victims of amoebae, in all probability, was the phytoplankton primarily lived in the oxygen-rich surface waters, however, from time to time descended to the bottom where they become food vampires.