Paleontologists explained the rebirth of life after the Great extinction 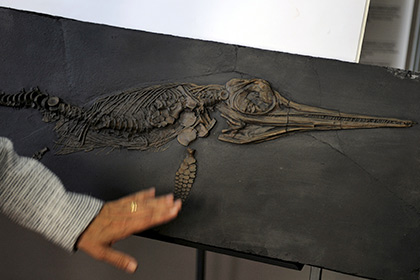 Paleontologists from the University of California, Davis (USA) figured out how the reptiles were able in only three million years to conquer the oceans, deserted after a global extinction in the late Permian period. It turned out that this could contribute to the restoration of circulation of marine waters, should be published on the University website press release.

About 250 million years ago, global climate changes of the planet, which most likely was caused by powerful volcanic eruptions, destroyed 96 percent of all marine creatures. However, scientists studying rocks and fossils, collected from lake Chaohu in China, found that the restoration of the Earth’s biosphere didn’t take a lot of time on a geological scale.

Paleontologists have found fossils of the oldest known marine reptile, whose age reaches 248,81 million years. In particular, it was discovered the remains of ichthyosaurs and sauropterygia, whose descendants continued to inhabit the sea in the Mesozoic era of the dinosaurs. Sauropterygia, for example, gave rise to the plesiosaurs and pliosaurs, which lasted until the end of the Cretaceous period.

Scientists also found that during and after the mass extinction chemical composition of the ocean has undergone significant changes. At the turn of the Permian and Triassic periods stopped vertical mixing of water layers, resulted in a lack of dissolved oxygen. However, the first marine reptiles appear almost immediately after the return of normal ocean circulation, which likely contributed to the rapid restoration of marine ecosystems. Intensive mixing of marine waters could bring to the surface nutrients become food for the creatures that were in the bottom of the food chain and served, in turn, lunch for large predators.

The great Permian extinction is one of five mass extinctions, which led to the deaths of not only sea creatures and 70 percent of terrestrial vertebrate species over a period of time about 60 thousand years.