Paleontologists have become angry on the owner of “the quadruped snake” 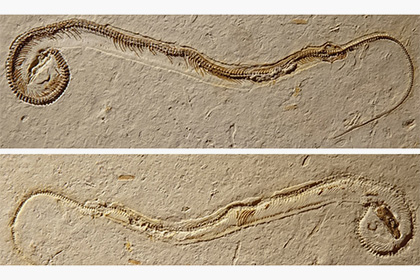 The ancient animal of Tetrapodophis amplectus reminding a snake with four paws can lose a rank of a missing link in evolution of reptiles and even to be buried in oblivion in scientific community. The owner of the only fossil who has closed access to remains of a reptile that has angered scientists is the reason of it. Reports the Science edition about it.

Paleontologists led by David Martill have found an animal in one of the German museums. Remains have been initially found in Brazil in the geological exposure of Crato formed by calcareous breeds age of 108 million years. Characteristic features of a fossil reptile were the long ridge consisting of 150 vertebras, rather short tail, curved teeth and scales on a stomach. Researchers called a reptile of Tetrapodophis amplectus and have assumed that it is a transitional form in evolution of snakes.

This point of view was challenged by other paleontologists. Michael Caldwell believes that remains belong to the representative of the died-out genus of sea lizards of Dolichosaurus. To confirm one of two hypotheses, additional researches are necessary. However at the moment the analysis is impossible as fossils as it has appeared, entered a private collection.

The owner of Tetrapodophis amplectus has limited access to an animal probably because during the researches remains have been damaged. As researchers can’t study an ancient reptile, some experts suggest to forget about it, and to withdraw Martill’s article from the press. According to them, Tetrapodophis amplectus has no relation to science as he can’t be investigated more, and one of the main criteria of scientific character is reproducibility of data.