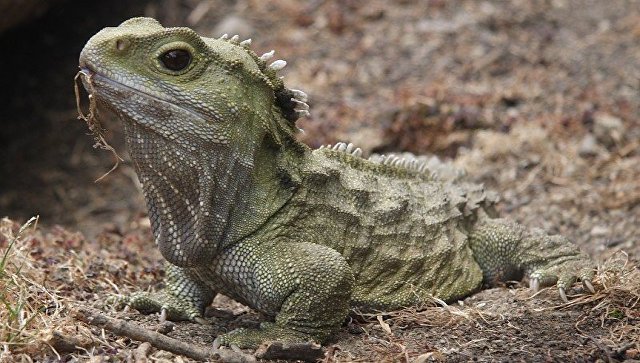 The researchers analyzed the structure of the jaws of several types of “living fossils” and their normal relatives, and came to the conclusion that Darwin was right – evolution of these species of animals for some mysterious reasons really stopped.

“Biologists have a very negative attitude to the term “living fossil” because they consider it too vague. We figured out how you can very accurately measure the speed of evolution and we have confirmed that the lizard-tuatara are the “fossil”. It is possible to mathematically state that tuatara are extremely conservative and look the same as their ancestors 200 million years ago,” said Michael Benton (Michael Benton) from the University of Bristol (UK).

The term “living fossil” was first proposed by Charles Darwin in his fundamental work “On the origin of species” in 1859 when he noticed a strange anatomical features of the platypus and lungfish fish, allowing them to consider some transitional forms between the two groups of animals, the owners of hell beings, who long ago disappeared from the face of the Earth.

As a rule, “living fossils” are members of extinct genera and the classes of living beings who managed to survive due to the isolation of their habitats and due to the lack of better competitors. Among these species are the “fossil fish” the coelacanth, cousin of the first land vertebrates, the purple frog, platypus and a relative of the giraffe Okapi.

Benton, a famous British paleontologist, and his colleagues decided to test whether those species that today are considered “living fossils”, stopped in its development, and look the same as they looked hundreds of millions of years ago.

For these experiments, the researchers chose hattery (Sphenodon punctatus) is a large reptile living in New Zealand, similar to lizards, but are not members of the order Squamata, which includes all modern lizards.

Tuatara are the closest relatives of the so-called cluboholic reptiles (Sphenodontia) – of reptiles that appeared on Earth about 220 million years ago, and widely distributed on land and in the seas of the Jurassic period and subsequent periods. The majority of sphenodontia became extinct along with the dinosaurs, and our time has survived only new Zealand tuatara.

According to Benton, the closest relatives of hattery, is most similar to them anatomically, lived on Earth even before the appearance of the first dinosaurs in the Triassic period, about 200 million years ago. Since then, the tuatara is not actually changed – their evolution has been “frozen” for yet unexplained reasons.

“We stand on the side of Darwin we now have a mathematical way to check whether one or the other “living fossil”. More importantly, now we can check out other classic examples of such animals,” concludes Benton.