Paleontologists have found remains of the first animal sushi 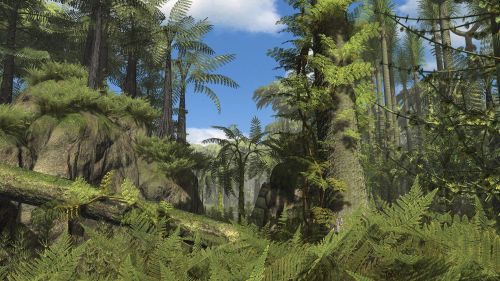 In Scotland remains of the primitive amphibians which have left water are found. New finds close mysterious “failure” in the history of development of sushi vertebral.

Between 360 million years ago when there were already numerous and various four-footed amphibians, and 335 million years ago when the first remains full тетрапод sushi are found, in the paleontologic chronicle the failure lies. For the first time he was found by the British scientist Alfred Rohmer in honor of whom called this strange thing, and the most offensively is the fact that he covers a key stage of evolution of all fauna – an exit of vertebrata to the land.

The reasons for that are offered different. According to some scientists, “Rohmer’s failure” is caused by the delay with an exit to the land which was really taking place which is connected with the insufficient level of oxygen in the atmosphere. Also more careful options are called, up to a case which hasn’t specified to paleontologists the right place for searches of remains of the necessary time yet.

Really, step by step “Rohmer’s failure” is filled. A few years ago in the territory of Scotland the remains of an amphibian dated 360-345 million years ago have been found. And recently the Cambridge professor Jennifer Clack and her colleagues have published descriptions in the Nature Ecology & Evolution magazine of five finds relating by the time of “Rohmer’s failure” at once.

The remains relating to a turneysky tier (360-345 million years ago) aren’t each other close relatives. It shows that by then inhabitants of sushi have already accustomed here and were enough diversified. On the other hand, they still remained not too large, with skulls slightly more than 5 cm in size Nakhodka has been made in Scotland, at a river bed Uaytadder-Uoter again, and also at the coast near the village Byornmaut. Millions years ago there were inundated plains, and four-footed pioneers of sushi already mastered their different ecological niches.