Paleontologists knew of a way of life of “foremother” of mankind 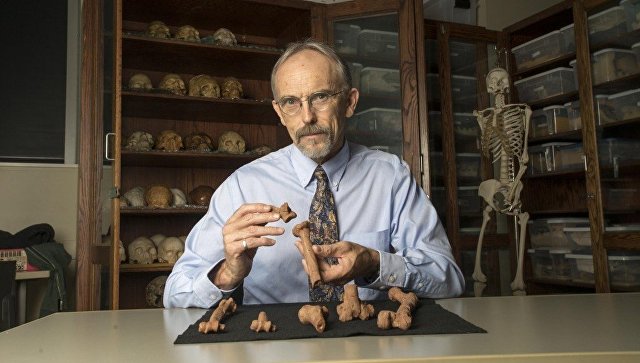 Paleontologists found new certificates of the fact that the famous Lucie who is considered today as “foremother” of our sort spent much time on branches of trees, and not just traveled around plains.

“For us the fact that early gominina, such as Lucie, possessed a capability to bipedalism and at the same time spent much time can seem unique, climbing trees. Of course, Lucie didn’t know about the uniqueness and just lived on ancient Earth, going on the ground, climbing trees where she looked for food and weaved nests until her life didn’t break after accident and fall on the earth” — John Kappelman from university of Texas in Austin (USA) tells.

Today among paleontologists and anthropologists there is no consensus about where there is a homeland of the modern person and when the first representatives of our sort appeared. Two corners of Africa – national park Avash in Ethiopia and “Cradle of Humankind” in the Olduvaysky gorge in South Africa to the same extent apply for this role.

The first candidate is spoken well that in the territory of this region in 1972 remains of Lucie – the young female of the Afar Australopithecus living 3,18 million years ago in the region Afar in Ethiopia were found. Her extremities were adapted for bipedalism, and many lines of anatomy were similar to how the person is suited that forces many scientists to consider that Lucie is peculiar “foremother” of the sort Homo.

Today Lucie had strong competitors – “Littlfut” and “person star” of Homo naledi from South Africa therefore scientists with new interest study their remains in attempt to find this ancestor of the sort Homo.

In August of this year Kappelman and his colleagues found certificates of the fact that Lucie died, having broken from a tree and having hit against the earth that engendered doubts in its “primogeniture” at some scientists. Other paleontologists apprehended Kapelman’s idea in bayonets, having dropped a hint of doubt in reliability of the data used by them and techniques of their analysis.

Answering criticism, authors of article repeatedly analysed more than 35 thousand “cuts” of her bones received by means of “raying” by the computer tomograph of all its known remains and compared them remains of two other types of primacies – the person and a chimpanzee.’

As scientists explain, lifestyle of an animal is reflected in how the skeleton – in those places which experience the maximum load is arranged it, bones are thickened, and those bones which become loaded least of all, on the contrary, by thinner. Respectively, comparison of bones of closely related types allows to understand where lived and what one of their owners was engaged in, knowing ecological niches of his relatives.

“Players in tennis are an excellent example of this phenomenon – a bone tissue in their “raketochny” hand much more densely, than its analog in the second hand” — the scientist continues.

Similarly, bones of the person “are gradually thickened” if to take a detached view of them skulls in the direction of legs that indicates that we lead mainly land life. The return picture is characteristic of a chimpanzee – bones of their hands and shoulders are much thicker and larger from above that is connected with their wood way of life.

For Lucie as it has appeared, other picture was characteristic absolutely – thickness and durability of the top and lower parts of her bones was approximately identical that means that she was intermediate between people and a chimpanzee.

As authors of article consider, the similar result says that Afar Australopithecuses spent approximately equal amount of time on the earth and on branches of trees. As scientists consider, Lucie and her relatives built the nests on trees protecting them from predators during sleep or dormant periods. In the afternoon Afar Australopithecuses probably went down on the earth and looked for food in savannas and on plains, without avoiding at the same time and the woods.

All this as Kapelman and his colleagues consider, doesn’t disprove, and speaks well for the fact that Lucie and her relatives really were a “transitional” view between our ancestors from the sort Homo and ancient hominids.