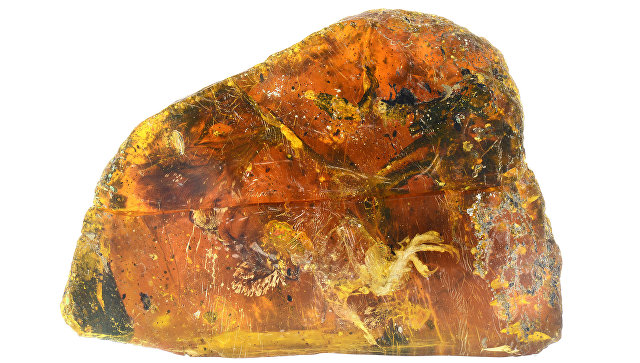 Paleontologists from the USA, Canada and China presented for the first time to the general public in Beijing a 99-year-old nestling chick.

The sample presented in Beijing (inclusion) was found in northern Myanmar as early as 2016, however, scientists spent several months defining its exact dating.

“This time we found a sample of amber 9 centimeters long, which completely contained the head, cervical spine, wings and tail of the ancient bird,” said Louis Chiappe, a famous paleontologist at the National Historical Museum in Los Angeles.

According to scientists, this finding is considered unique, because unlike the remains found in the earth, a full-fledged chick remained in the amber frozen in amber, and more importantly the skin, plumage and even ear holes and eyelids, which gives Scientists a rare chance of a detailed study of prehistoric birds.